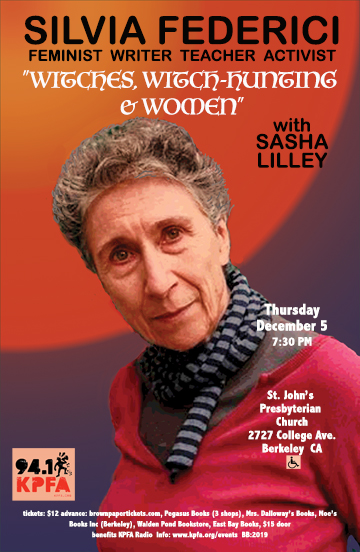 Silvia Federici’s new book offers a brilliant analysis and forceful denunciation of the violence directed toward women and their communities. Her focus moves between women criminalized as witches both at the dawn of capitalism and in contemporary globalization.

​We are witnessing a new surge of interpersonal and institutional violence against women, including new witch hunts. This surge of violence has occurred alongside a global expansion of capitalism. In this new work, revisiting some of the main themes of Caliban and the Witch, Silvia Federici examines the root causes of these developments and outlines the consequences for the women affected and their communities. All too like the witch hunts in sixteenth and seventeenth-century Europe and the “New World,” this contemporary war on women is a structural element of various new forms of capitalist accumulation. These processes are founded on the destruction of people’s most basic means of reproduction. What we discover behind today’s violence against women are processes of enclosure, land dispossession, and the remolding of women’s reproductive activities and subjectivity. As well as an investigation into the causes of this new violence, the book is also a feminist call to arms. Federici’s work provides new ways of understanding the methods in which women are resisting victimization. She offers a powerful reminder that reconstructing the memory of the past is crucial for the struggles of the present.

It is good to think with Silvia Federici, whose clarity of analysis and passionate vision come through in essays that chronicle enclosure and dispossession, witch-hunting and other assaults against women, in the present no less than the past. It is even better to act armed with her insights.

Silvia Federici is a feminist writer, teacher and militant. In 1972 she was cofounder of the International Feminist Collective that launched the Wages for Housework campaign internationally. Her previous books include: Wages Against Housework, Revolution at Point Zero: Housework, Reproduction and Feminist Struggle, and Re-enchanting the World: Feminism and the Politics of the Commons

Sasha Lilley is the editor of Capital and Its Discontents: Conversations with Radical Thinkers in a Time of Tumult. She is also a contributor to the Turbulence Collective’s What Would it Mean to Win?, and a co-founder and host of the Pacifica Radio program Against the Grain.