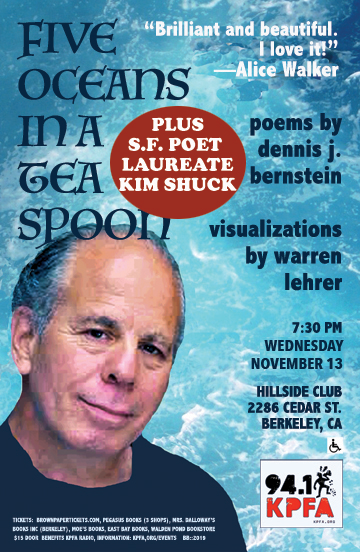 Brilliant and beautiful. I love it! Thank you for bringing in the new.

Five Oceans in a Teaspoon is a memoir in short visual poems, written by poet/investigative journalist Dennis J Bernstein, typographic visualizations by designer/author Warren Lehrer. Like his journalism, Bernstein’s poems reflect the struggle of everyday people trying to survive in the face of adversity. Divided into eight chapters, it spans a lifetime: growing up confused by dyslexia and a parent’s alcoholism; graced by pogo sticks, boxing lessons and a mother’s compassion; becoming a frontline witness to war and its aftermaths, to prison, street life, poverty, love and loss, to open heart surgery, caring for aging parents and visitations from them after they’re gone. Lehrer’s typographic compositions give form to the interior, emotional and metaphorical underpinnings of the poems. Together, the writing and visuals create a new whole that engages the reader to become an active participant in the navigation, discovery, and experience of each poem.

Bernstein and Lehrer—the Lennon and McCartney of viz-lit—have reunited at the height of their creative powers. Five Oceans in a Teaspoon speaks to the madness, vulnerability, aspiration and language of our time. The gutsiness and raw emotion of the writing, revelatory appeal of the visual compositions, and brevity of the form creates an intensely moving experiential journey.

Dennis J Bernstein, a poet and investigative journalist, is the award-winning producer of Flashpoints, heard weekdays at 5PM on KPFA, 94.1FM throughout northern California and syndicated on public and community radio stations across the country. His essays have appeared in numerous newspapers, magazines and websites. His artists’ books French Fries and GRRHHHH, co-authored with Lehrer, are in many museum collections.

Warren Lehrer is a writer, designer and multimedia artist known as a pioneer in visual literature and design authorship. His work is in the collections of MoMa, the Getty Museum, the Georges Pompidou Centre, the Tate Gallery and many other institutions. He is the Leff Distinguished Professor at SUNY Purchase, and a frequent lecturer and performer.