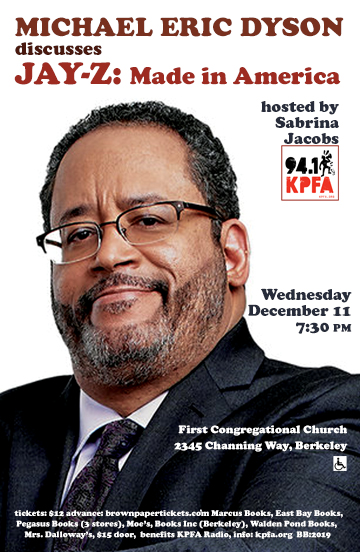 Bestselling author Michael Eric Dyson has created a powerful portrait of JAY-Z as a true cultural icon. Published to coincide with the great composer’s 50th birthday (December 4). JAY-Z is America at its scrappy, brash, irreverent, soulful, ingenious best: as transcendent a cultural icon as Frank Sinatra, as adventurous a self-made billionaire as Mark Zuckerberg, as gifted a poet as Walt Whitman. As he reaches the half-century mark, JAY-Z has logged thirty years as a recording artist, become the genre’s first billionaire, and now reigns as an elder statesman in a field teeming with artists half his age as he continues to make relevant rap records that invariably chart well.

JAY-Z’s body of work is an artistic and political response to revived racism and renewed hostility to blackness. It is an auspicious time to examine his ideas, gifts, and impact, to take measure of his stride as a cultural colossus. There is no one better suited to this task than Michael Eric Dyson, who has investigated and championed Hip Hop and the work of JAY- Z as a critical American art form for decades. Just as JAY-Z requested in his 2003 song “Public Service Announcement,” to “Allow me to re-introduce myself,” this incisive celebration will introduce his work and thought to those who may not know him, and re-introduce him to those who want to examine his art and his evolution more closely. JAY-Z proclaimed in 2001 that he is the “God MC—me—JAYHOVA.” He is a witness to America, a witness of America, and we—this book included—are witness to him and the nation. Describing the evolution of JAY-Z’s work and thinking, Dr. Dyson offers an in-depth analysis of some of this unique artist’s most beloved lyrics.

JAY-Z: Made in America is destined to become a collector’s item. Michael Eric Dyson, one of America’s premier public intellectuals, is the author of the New York Times’ bestsellers “Tears We Cannot Stop” and “What Truth Sounds Like.” He currently occupies the distinguished position of University Professor of Sociology at Georgetown University, is a contributing opinion writer for the New York Times, and is a contributing editor of The New Republic and ESPN’s The Undefeated. Ebony magazine named him one of the 100 Most Influential African-Americans and one of the 150 most powerful blacks in the nation.