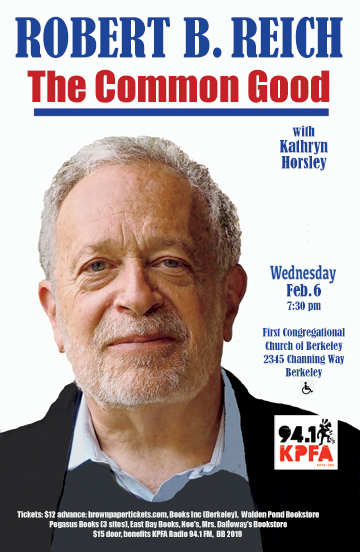 For decades one of the most farseeing, outspoken public intellectuals in the United States has been Robert B. Reich. Now he provides us with The Common Good, his sixteenth book, a passionate, clear-eyed manifesto urging the recentering of our national economics and politics on the profound idea of the common good. Responding to the prevailing uproar of divisiveness, cynicism and blind self-interest, Reich makes a powerful case for expanding America’s moral imagination. Rooting his argument in common sense and everyday reality, he demonstrates that a common good not only exists, but in fact is the very essence of any functional society or notion. Societies, he asserts, undergo varying virtuous cycles that reinforce the common good as well as vicious cycles that undermine It – one of which this country has been experiencing for the past five decades. This can and must be reversed.

First we must weigh the moral obligations of citizenship and carefully consider how as a country we should relate to honor, shame, patriotism, truth and the meaning of leadership. This is a heartfelt statement from a major political thinker devoted to saving America’s soul.

Robert B. Reich is Chancellor’s Professor of Public Policy at the Goldman School of Public Policy at the University of California, Berkeley. He has served in three national administrations and has written fifteen books, including The Work of Nations, Saving Capitalism and Locked In the Cabinet. His essays have appeared in The New Yorker, The Atlantic, The New York Times, The Washingon Post, and The Wall Street Journal. He is currently chair of the national governing board of Common Cause.

Kathryn Horsley is a retired public health researcher and civil servant who worked on demographic and reproductive health research in Bolivia, East Africa and the Middle East for 16 years. More recently she worked for Seattle-King County Public Health and Alameda County Public Health Departments on community assessment and mapping of health outcomes regarding infant and maternal mortality, teen pregnancy, etc. Kathryn has done community outreach for KPFA Radio, and over the past three years has co-produced benefit events for KPFA.