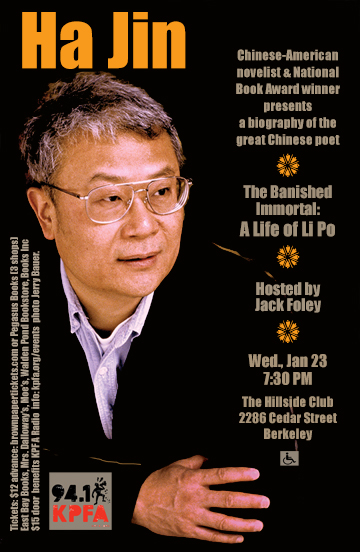 The Banished Immortal
A LIFE OF LI PO

Ha Jin, National Book Award-winning author of Waiting, now gives us a deeply human biography of the 8th century poet, Li Bai–also known as Li Po—China’s most beloved poet. Drawing on a wide range of historical and literary sources, Ha Jin dramatically conveys the life of Li Po (701-762), whose poems–shaped by Taoist thought, characterized by passion and lust for life–sang throughout the Tang Dynasty and are still celebrated today. From his birth on China’s western frontier, Li Po is followed through the legendary wanderings that allowed him to deepen his poetry, share his verses with strangers, and win such friends as the equally famous poet Tu Fu. In his later years, Li Po was swept up in a military rebellion that altered the history of China.

The Banished Immortal is an extraordinary portrait of a poet who both transcended his time and was shaped by it. The poet’s ability to live, love, and mourn deeply has produced some of the world’s most enduring verses.This is a biography only Ha Jin could have written. The great novelist left his native China in 1985 to settle in the U.S. He is the author of eight novels, four books of poetry, and a book of essays. He has received the National Book Award, two Pen/Faulkner Awards, the Pen/Hemingway Foundation Award, the Asian-American Literary Award, and the Flannery O’ Connor Award for Short Fiction. In 2014 Ha Jin was elected to the American Academy of Arts and Letters. He is a member of the American Academy of Arts and Letters. Currently Ha Jin is a professor of English and creative writing at Boston University.

Li Po was one of China’s greatest poets (like Homer in the West, he is a touchstone for millions of readers in the East). His influence extends far beyond Asia. He was taken up by Ezra Pound, Robert Bly, and others. Widely translated, Li Po represents much of what we need to understand about Chinese culture. His Taoist beliefs will be of particular interest to those familiar with the Tao Te Ching.

JACK FOLEY is a poet and critic well known in the Bay area. His radio show, Cover to Cover, is heard every Wednesday at 3pm Pacific time on KPFA Radio, 94.1FM. His website is jack-adellefoley.com.