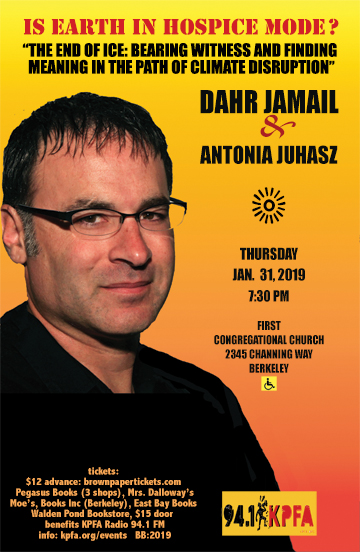 IS EARTH IN HOSPICE MODE?
THE END OF ICE: BEARING WITNESS AND FINDING MEANING IN THE PATH OF CLIMATE DISRUPTION

Dahr Jamail has journeyed along many of the geographical front lines of our environmental crisis, from Alaska to Australia’s Great Barrier Reef to the Amazon rain forest, to discover the consequences of the loss of ice to nature and to humans. The End of Ice is the firsthand chronicle of his travels, during which he scaled Denali, the highest peak in North America, swam in warm crystal waters around Pacific coral reefs, explored the tundra of St. Paul Island and spoke with some of the last subsistence seal-hunters of the Bering Sea. Accompanied by climate scientists and people whose families for centuries have fished and farmed in the various places he visits, Dahr begins to accept the dark fact that earth is almost certainly in a hospice situation. Ironically, this renews his passion for the planet’s wild places, cherishing the earth in an entirely new way. Like no other book, The End of Ice offers a true narrative that includes photographs throughout by Dahr of his journey across the world, of the catastrophic reality of our predicament, and the incalculable necessity of relishing this vulnerable planet while it is still possible. The author of Beyond the Green Zone: Dispatches from an Unembedded Journalist in Occupied Iraq, Dahr is an accomplished mountaineer and climbing guide. He has won the Martha Gellhorn Prize for Journalism and the Izzy ‘Award for outstanding achievement in independent media.

Antonia Juhasz is a leading energy analyst, author, and investigative journalist specializing in oil. An award-winning writer, her articles appear in Newsweek, Rolling Stone, Harper’s Magazine, The Atlantic, CNN.com, The Nation, Ms., The Advocate, and many more. Antonia is the author of three books: Black Tide (2011), The Tyranny of Oil (2008), and The Bush Agenda (2006). Her investigations have taken her a mile below the ocean surface in the Gulf of Mexico to the rainforests of the Ecuadorian Amazon, from the deserts of Afghanistan to the fracking fields of North Dakota, from the Alaskan Arctic to the beaches of Santa Barbara, and many more places in between. She holds a Masters Degree in Public Policy from Georgetown University and a Bachelor’s Degree in Public Policy from Brown University. She is a member of the Society of Environmental Journalists and Investigative Reporters and Editors. Antonia founded and runs the (Un)Covering Oil Investigative Reporting Program. She delivered the lecture, “Covering Catastrophe: Environmental Destruction and Resistance in the Age of Trump,” at Yale in November 2017. Antonia reported from Standing Rock on the Dakota Access Pipeline for Pacific Standard Magazine and Grist. She completed a series of six articles for Newsweek on the UN Paris climate talks, reporting from Alaska, North Dakota and Paris. Recently she co-hosted KPFA Radio’s Up/Front show.