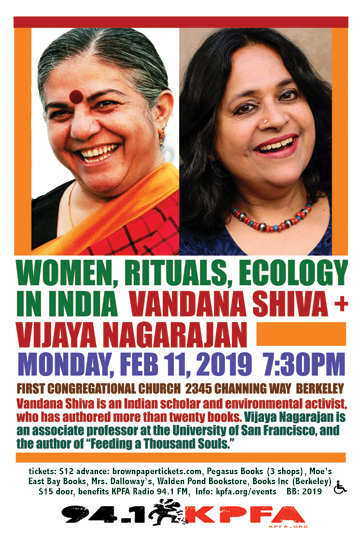 Vandana Shiva is an Indian scholar and environmental activist, who has authored more than 20 books.
Vijaya Nagarajan is an associate professor at the University of San Francisco, and the author of “Feeding a Thousand Souls”.

Vandana Shiva is an Indian scholar, environmental activist, food sovereignty advocate, and alter-globalization author. Currently based in Delhi, she has authored more than twenty books, Including Who Really Feeds the World?, The Failures of Agribusiness and the Promise of Agroecology and Making Peace wth the Earth. She is one of the leaders and board members of the International Forum on Globalization (along with Jerry Mander, Edward Goldsmith, Ralph Nader, Jeremy Rifkin) and a figure of the global solidarity movement known as the alter-globalization movement. She has argued for the wisdom of many traditional practices, as evidenced by her interview in the book Vedic Ecology. She is a member of the scientific committee of the Fundacion IDEAS, Spain’s Socialist Party’s think tank. She is also a member of the International Organization for a Participatory Society. She received the Right Livelihood Award in 1993, an honor known as an “Alternative Nobel Prize”. Before becoming an activist, Shiva was one of India’s leading physicists.

Vijaya Nagarajan is an Associate Professor in the Department of Theology/Religious Studies and in the Program of Environmental Studies at the University of San Francisco. She writes about Hinduism, gender, ritual, ecology and the commons. Recently her work has centered around spiritual autobiographies of place, especially around immigration and motherhood. She has been active in the American Academy of Religion and in environmental movements in the United States.

Every day millions of Tamil women in southeast India wake up before dawn to create the kōlam, a ritual design made of rice flour, on the thresholds of homes. This thousand year-old ritual welcomes and honors the goddesses Lakshmi and Bhudevi. Propelled by a lifelong interest and deeply informed research, Nagarajan provides a poetic and surprising entry into the layered complexities of Hindu culture. Braiding Tamil women’s voices and the author’s own stories, Feeding a Thousand Souls offers different knowledge traditions––beauty, history, gender, literature, religion, anthropology, mathematics, and ecology.

Feeding a Thousand Souls represents a lifetime’s work on Tamil women’s daily ritual practice, the artful threshold designs variously known as kolam, alpana, and rangoli throughout much of the Indian subcontinent. Vijaya Nagarajan tells local and diasporic stories of the kolam with passion, sensitivity, and deep ethnographic identification with the women whose generosity daily feeds a thousand souls.”