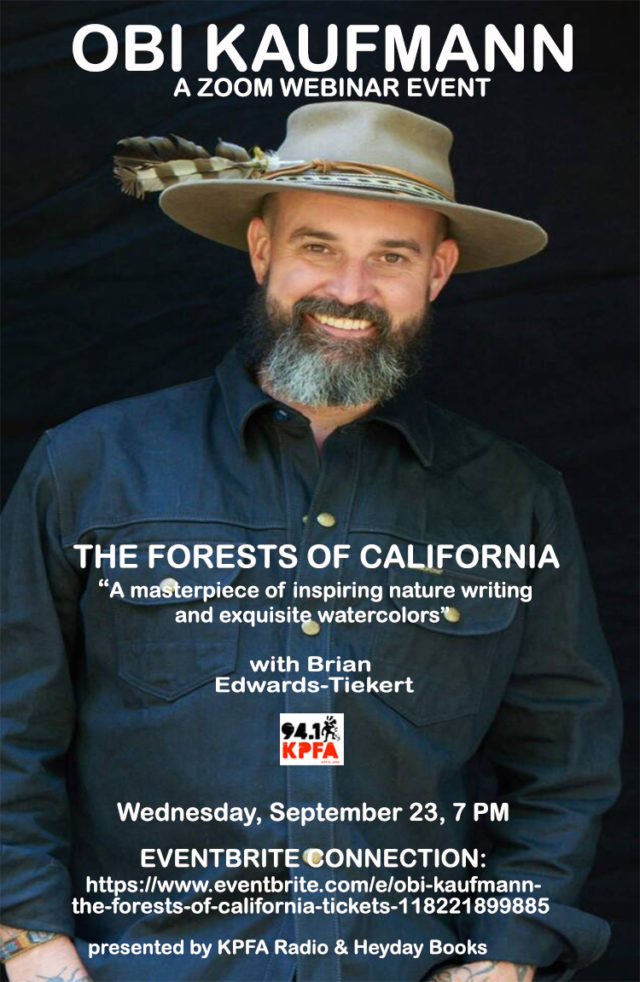 OBI KAUFMANN
The Forests of California
A Zoom Webinar Event

From the author of The California Field Atlas comes another major work that not only guides readers through the Golden State’s forested lands, but also presents a profoundly original vision of nature in the 21st century. The Forests of California features a stunning wealth of Obi Kaufmann’s signature watercolor illustrations, maps, and trail paintings, weaving them into an accessible exploration of the biodiversity that defines California in the global imagination. Kaufmann tells an epic story that spans millions of years, nearly one hundred species of trees, and an astonishing richness of ecosystems. The Forests of California is the first volume in a planned trilogy of field atlases, with The Coasts of California and The Deserts of California yet to come.

Just as Kaufmann is creating a fresh understanding of the more-than-human world, KPFA Radio is herewith undertaking the new visual media of the webinar, leaping off with The Forests of California – a work unusually deserving of being visible on our screens.

Growing up in the East Bay as the son of an astrophysicist and a psychologist, Kaufmann spent most of his high school practicing calculus and breaking away on weekends to scramble around Mount Diablo and map its creeks, oak forests, and sage expanses. Into adulthood he regularly journeyed into the mountains. He is the author of The California Field Atlas, which won the California Book Award, and The State of Water: Understanding California’s Most Precious Resource. His website is coyoteandthunder.com.

Brian Edwards-Tiekert is the founder and co-host of UpFront, the morning drive-time public affairs program on KPFA Radio. He began working in media by helping to set up the Independent Media Center in Chiapas, Mexico, where he also did human rights work. For two years, he ran a nationwide support program for progressive publications at colleges and universities. Brian started at KPFA as a beat reporter covering environmental justice issues, during which time he served as a network correspondent during international climate negotiations. In 2016, he was awarded a John S. Knight Journalism Fellowship at Stanford University.