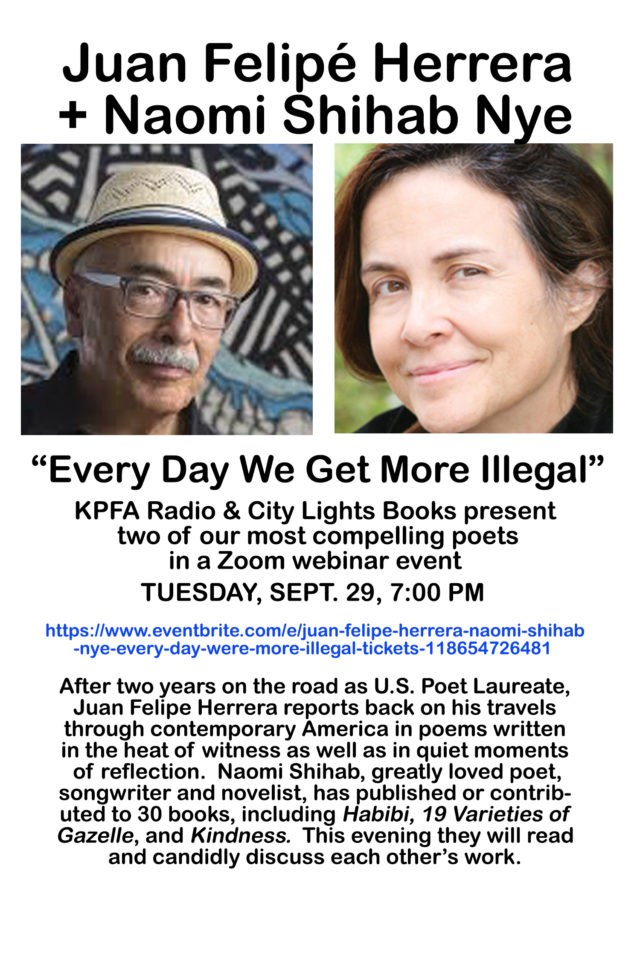 Every Day We Get More Illegal
A Zoom Webinar Event

After two years on the road as United States Poet Laureate, Juan Felipe Herrera reports back on his travels through contemporary America. Poems written in the heat of witness, and later, in quiet moments of reflection, here coalesce into an urgent yet hope-filled portrait. The struggle and pain of those pushed to the edges, the wild injustice of our streets, the lethal border game that separates and divides, and then a shift – a leap for peace and a view into the possibility of unity. Every Day We Get More Illegal is a jolt to the collective conscience, a jolt filled with the many voices of everyday life in America.

Another of the most colorful, cherished and charismatic voices in America is that of Naomi Shihab Nye, a poet, songwriter, and novelist. She will read some of her own work and talk with her friend Juan Felipe on the theme – Every Day We Get More Illegal. Born to a Palestinian father and an American mother, Naomi composed her first poem when was six years old. She has since published or contributed to over thirty books, including poetry, young-adult fiction, anthologies, and novels. Among her books are Habibi, 19 Varieties of Gazelle, Red Suitcase, Fuel, and A Maze Me. Naomi is the recipient of writing fellowships from the Lannan Foundation, the Guggenheim Foundation and the Witter Bynner Foundation/Library of Congress.

Juan Felipe Herrera, in addition to being a poet, is a performer, writer, cartoonist, teacher and activist. His twenty-plus books include The Upside Down Book, Thunderweavers, Notes on the Assemblage, 187 Reasons Mexicanos Can’t Cross the Border: Undocuments 1971-2007, and Half the World in Light. He is known for his often-bilingual and autobiographical poems on immigration, Chicano identity, and life in California. Herrera was born to migrant farmworkers in southern California and spent his early youth on the move, living in tents and trailers in small farming towns throughout the San Joaquin Valley.

This webinar promises to be an unusually frank, candid, and politically challenging event.

Sabrina Jacobs is host and producer of the popular KPFA program, A Rude Awakening. She covers local breaking news as well as global events, often informing listeners about the urgent social injustices that get ignored by mainstream media. Ms. Jacobs, a frequent host on KPFA events and webinars, is also currently serving on Pacifica Radio’s National Board.