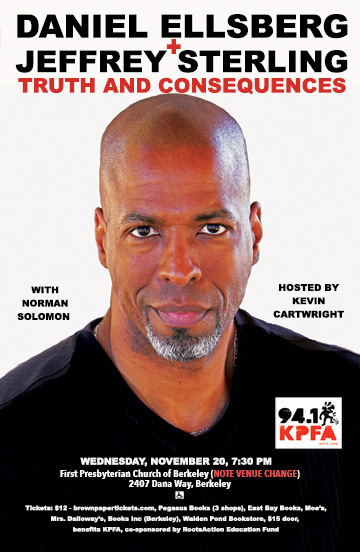 This important discussion between two major American whistleblowers will focus on the urgent need to end unaccountable government power.

Daniel Ellsberg is an American activist and former United States military analyst formerly employed by the RAND Corporation. He precipitated a national political controversy in 1971 when he released the Pentagon Papers, a top-secret Pentagon study of the U.S. government decision-making in relation to the Vietnam War, to The New York Times and other newspapers. In 1973, Ellsberg was charged under the Espionage Act along with other charges of theft and conspiracy, carrying a total maximum sentence of 115 years. Due to governmental misconduct and illegal evidence-gathering, and the defense by Leonard Boudin and Harvard Law School Professor Charles Nesson,  all charges against Ellsberg were dismissed. He was awarded the Right Livelihood Award in 2006. He is also known for voicing support for Wikileaks, Chelsea Manning, and Edward Snowden. Ellsberg was awarded the 2018 Olof Palme Prize for his humanism and exceptional moral courage.

Jeffery Sterling is a former CIA agent convicted under the Espionage Act for talking to a New York Times reporter. He was released from prison after serving more than two years of his 42-month sentence. Sterling’s case drew nationwide attention because the Obama-era Department of Justice unsuccessfully tried to force the reporter, James Risen, to divulge the identity of his sources for “State of War,” his book that revealed just how the CIA had botched a covert operation against Iran’s nuclear program. Risen reported that instead of undermining the Iranians, the CIA had provided them with useful information on how to build a nuclear bomb. The case had a racial dimension, as Sterling was one of the few black undercover operatives at the CIA. After several years of what he believed was discriminatory treatment, he filed a complaint against the agency, followed by a lawsuit. The CIA fired Sterling in 2002. His lawsuit was blocked by the courts after the government argued successfully that proceeding with the suit would expose state secrets. As a whistleblower, Sterling subsequently met with Senate investigators about the mismanaging of a classified program he worked on at the agency.

Norman Solomon is the author of a dozen books including “War Made Easy: How Presidents and Pundits Keep Spinning Us to Death.” He is also the Founder and Executive Director of the Institute for Public Accuracy, where he coordinates the ExposeFacts.org program for whistleblowers and press freedom. He is co-founder of RootsAction.org.

Kevin Cartwright has since 1994 handled many important positions for Pacifica Radio station KPFA-FM. He is a communications strategist who continues working with various social change organizations across the country to help improve their communications.