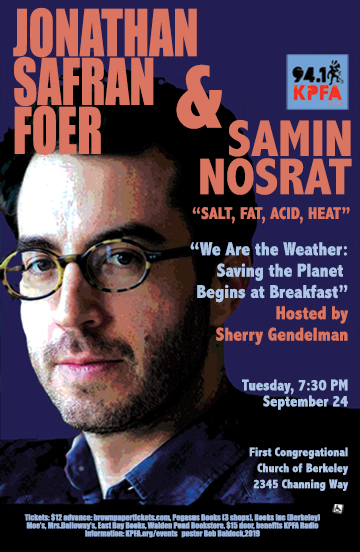 Some people reject the fact, overwhelmingly supported by scientists, that our planet is warming disastrously because of human activity. But do those of us who accept this fact truly believe it? If so, surely we would be roused to act on what we know. Will future generations distinguish between those who didn’t believe in the science of global warming and those who said they accepted the science but failed to change their lives in response?

In We Are the Weather, Jonathan Safran Foer explores the central global dilemma of our time in a surprising, deeply personal, urgent new way. The task of saving the planet will involve a great reckoning with ourselves―with our all-too-human reluctance to sacrifice immediate comfort for the sake of the future. We have, he reveals, turned our planet into a farm for growing animal products, and the consequences are catastrophic. Only collective action will save our home and way of life. And it all starts with what we eat―and don’t eat―for breakfast.

Foer’s message is both moving and painful, depressing and optimistic… it will force readers to rethink their commitment to combating ‘the greatest crisis humankind has ever faced.

* Climate change is the single biggest threat to human survival – and we are dealing with it all wrong.

* We take shorter showers to save water – because we don’t know that producing one pound of meat requires the equivalent of six months’ showers in water waste.

* We buy hybrid cars – because we don’t know that just one day a week without meat consumption is equivalent to taking every car in America off the road.

Jonathan Safran Foer is the author of four novels: Everything Is Illuminated, Extremely Loud & Incredibly Close, Tree of Codes, Here I Am, and two books of non-fiction: Eating Animals, and We are the Weather. His work has received numerous awards and has been translated into thirty-six languages. He lives in Brooklyn, New York.

Samin Nosrat is an American chef, TV host and food writer. She is a regular food columnist for The New York Times Magazine and has a Netflix docu-series based on her cookbook, Salt, Fat, Acid, Heat.

Sherry Gendelman is a frequent host of Piano, KPFA’s Sunday morning program of classical music. She is also a practicing lawyer and former listener member of the Pacifica Radio Board of Directors.