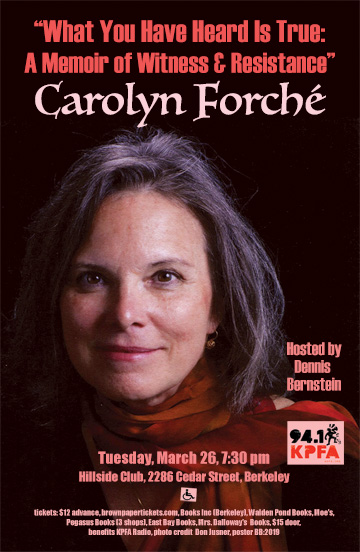 What You Have Heard Is True:
A Memoir of Witness & Resistance

This luminous book stands beside the memoirs of Pablo Neruda and Czeslaw Milosz in its account of a poet’s education, the struggle of a great artist to be worthy of her gifts. Carolyn Forché’s prose is shamanic: it sees both the surface of things and their inner workings, it animates the inanimate world.

-Garth Greenwell, author of What Belongs to You

For decades the story of how Carolyn became an effective activist has not been told. At last, in her shimmering, gripping prose, we learn how a fateful encounter and a radical act of empathy changed the course of her life. Carolyn was twenty-seven when a mysterious stranger appeared on her doorstep— a charming polymath with a mind as seemingly disordered as it was brilliant. She’d heard rumors about who he might be: a lone wolf, a communist, a CIA operative, a sharpshooter, a revolutionary, a coffee farmer…He had driven from El Salvador to invite her to his country. Captivated, she accepted and became enmeshed in something beyond her comprehension; they meet with high-ranking military officers, impoverished farm workers, and clergy desperately trying to assist the poor and keep the peace. These encounters are a part of his plan to educate her. As priests and farm-workers are murdered and protest marches attacked, Carolyn is swept up in his work and in the lives of his friends. Pursued by death squads, sheltering in safe houses, the two forge a rich friendship as she attempts to make sense of what she’s experiencing and establish a moral foothold amidst profound suffering. She learns how she can act as a witness and translate that into an art that might illumine the lives of others. That is “the poetry of witness,” and she has proven to be one of North America’s rare practitioners.

What You Have Heard Is True— a riveting and essential account of a young woman’s political awakening— is as beautiful as it is painful to read.