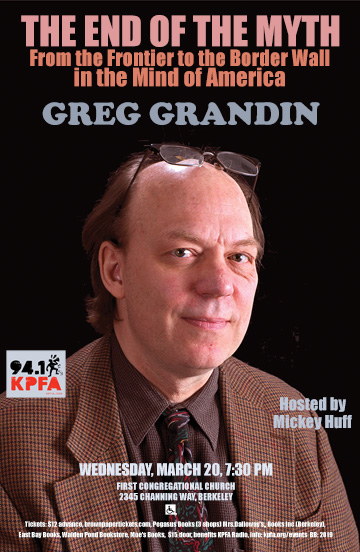 Regrets: event has been canceled due to author illness.

To live past the end of your myth is a perilous thing.
— Anne Carson

From the very beginning of this nation, the idea of an open frontier has been at the core of our American identity, symbolizing a future full of promise. Today, however, the USA has an entirely new symbol: the border wall. In The End of the Myth, acclaimed historian Greg Grandin explores the meaning of the frontier across the full sweep of US history, from the American Revolution all the way to the Trump presidency. Throughout the centuries, Grandin shows, America’s constant expansion served as a “gate of escape,” helping to deflect domestic conflicts outward. But this deflection meant that they country’s problems, from racism to inequality, were never confronted directly. Now the 2008 financial meltdown and our unwinnable wars in the Middle East have slammed this gate shut, bringing political passions and ugly racist nationalism back home with a vengeance.

We now have a president who has obsessively updated the frontier not to affirm brotherhood and internationalism, but resentment-stoked domination. “We have been taken advantage of by the world,” he insisted. “That is not going to be happening anymore.”

Greg Grandin is the author of The Empire of Necessity, which won the Bancroft Prize; Fordlandia, which was a finalist for the Pulitzer Prize, the National Book Award, and the National Book Critics Circle Award, plus a number of other widely acclaimed books, including Kissinger’s Shadow, Empire’s Workshop, The Last Colonial Massacre, and The Blood of Guatemala. A professor of history at New York University and a recipient of fellowships from the Guggenheim Foundation and the New York Public Library, Grandin has served on the United Nations Truth Commission investigating the Guatemalan civil war and has written for The Nation, the London Review of Books, and the New York Times.