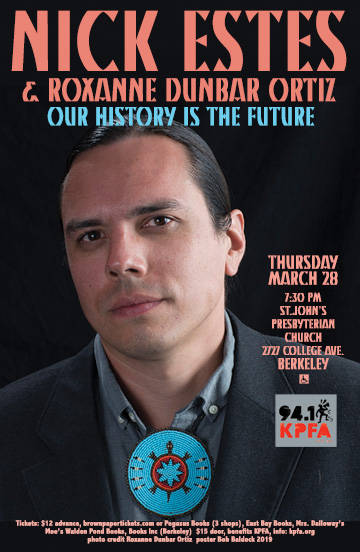 Our History Is the Future: Standing Rock vs the Dakota Access Pipeline and the Long Tradition of Indigenous Resistance.

This extraordinary history of resistance counters the myth of Indigenous disappearance and insignificance while calling into question the very notion that resistance itself is impossible in a world saturated by capital and atrophying inequality. This is a radical Indigenous history in its finest form.

In 2016, a small protest encampment at the Standing Rock reservation in North Dakota, initially

Established to block construction of the Dakota Access oil pipeline, grew to be the largest Indigenous protest movement in the twenty-first century, attracting tens of thousands

of Indigenous and non-Native allies from around the world. Its slogan – “Mni Wiconi” – Water is Life – was about more than just a pipeline. Water protectors knew this battle for Native sovereignty had already been fought many times before, and that even after the encampment was gone their anti-colonial struggle would continue. In Our History is the Future, Nick Estes traces traditions of Indigenous resistance from the days of the Missouri River trading forts through the Indian Wars, the Pick-Sloan Dams, the American Indian Movement and the campaign for Indigenous Rights at the United Nations. While a historian by trade, Estes also draws on personal observations from the encampments and from his own growing up as a citizen of Oceti Sakowin (the Nation of the Seven Council Fires), making this book a work of authentic history, a personal story, and a stirring manifesto for native liberation.

This book is a jewel—history and analysis that reads like the best poetry—certain to be a classic work as well as a study guide for continued and accelerated resistance.”

—Roxanne Dunbar Ortiz, author of An Indigenous People’s History of the United States

Nick Estes, a citizen of the Lower Brule Sioux Tribe, is an Assistant Professor of American Studies at the University of New Mexico, and a co-founder of The Red Nation, an organization dedicated to native liberation.