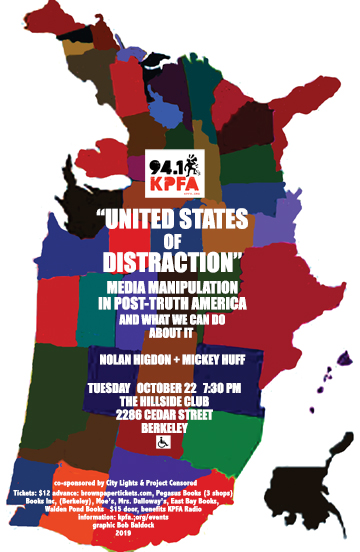 Higdon and Huff have produced the best short introduction to the nature of Trump-era journalism and how the ‘post-truth’ media world is inimical to a democratic society.

The role of news media in a free society is to investigate, inform, and provide a crucial check on political power. But does it actually do any of these things? It’s no secret that the goal of corporate-owned media is to increase the profits of the few, not to empower the many. As a result, people are increasingly immersed in an information system structured to reinforce their social biases and market to their buying preferences. Journalism’s essential role has been dramatically compromised, and Donald Trump’s repeated claims of “fake news” and framing the media as “an enemy of the people” have made a bad scenario worse.

ickey Huff andl Nolan Higdon emphasize what we can do today to restore the power of facts, truth, and fair, inclusive journalism as tools for people, to keep political and corporate power subordinate to the engaged citizenry and the common good.

Dr. Nolan Higdon is a lecturer of history and media studies at California State University, East Bay, and the University of San Francisco. He is co-host of the podcast Along the Line, and author of numerous articles, blog posts, and book chapters. He is a former co-host of the Project Censored Show, and a longtime contributor to Project Censored’s annual book, Censored. In addition, he has been a guest commentator for The New York Times, San Francisco Chronicle, and various television channels.

Mickey Huff is the current Director of Project Censored and president of the nonprofit Media Freedom Foundation. He has edited or co-edited ten annual volumes of Censored, and contributed numerous chapters. He is currently professor of social science and history at Diablo Valley College, where he is also co-chair of the history department. He is executive producer and co-host of the Project Censored Show, a weekly syndicated public affairs program aired over KPFA Radio and fifty community radio stations.