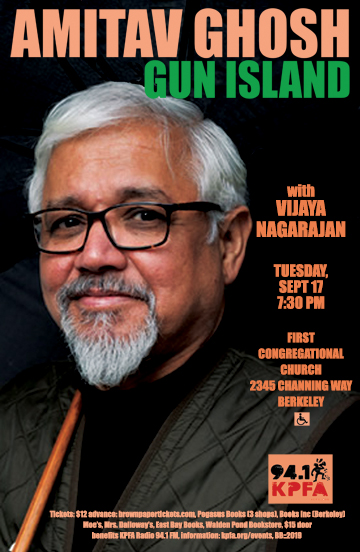 Gun Island is a globetrotting, folkloric adventure novel about family that tells the story of a world on the brink, of increasing displacement and unstoppable transition. It is exactly what is needed. It is also a story of hope, of a man whose faith in the world and the future
is restored by two remarkable women.

Amitav Ghosh, an Indian writer and winner of the 54th Jnanpith Award, is the author of the bestselling Ibis Trilogy, which includes Sea of Poppies (short-listed for the 2008 Man Booker Prize), River of Smoke, and Flood of Fire. Elected a Fellow of the Royal Society of Literature and a Ford Foundation Art of Change Fellow, in 1999 Ghosh joined the faculty at Queens College, City University of New York as Distinguished Professor in Comparative literature. Since 2005 he has also been a visiting professor at Harvard University. Ghosh’s notable non-fiction writings are In an Antique Land (1992), Dancing in Cambodia and at Large in Burma (1998), Countdown (1999), and The Imam and the Indian (2002, a large collection of essays on different themes such as fundamentalism, history of the novel, Egyptian culture, and literature). His most recent non-fiction book The Great Derangement: Climate Change and the Unthinkable (2016) bravely addresses why modern literature has failed to address issues of climate change, and how radical transformation due to nature has become ‘unthinkable’.

Vijaya Nagarajan, an Associate Professor in the Department of Theology/Religious Studies and in the Program of Environmental Studies at the University of San Francisco, writes about Hinduism, gender, ritual, ecology and the commons. Recently her work has centered around spiritual autobiographies of place, especially around immigration and motherhood. She has been active in the American Academy of Religion and in environmental movements in the United States. Propelled by a lifelong interest and deeply informed research, Nagarajan provides a poetic entry into the layered complexities of Hindu culture with her recent book on the Kolam, Feeding a Thousand Souls.