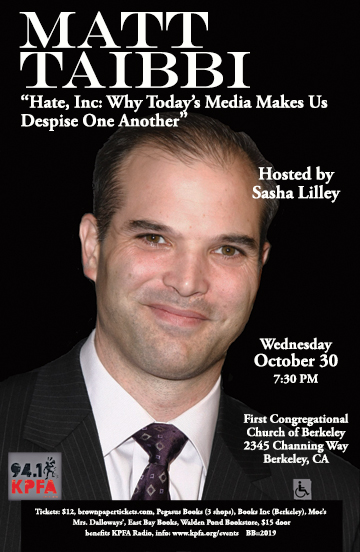 MATT TAIBBI
HATE, INC: Why Today’s Media Makes Us Despise One Another

Taibbi, a writer of striking intelligence and bold ideas, is as hilarious as he is scathing.

Taibbi is the best American journalism has to offer.

Where other mainstream news sources fail, Matt Taibbi madly embraces his role as an honest political observer/writer/citizen in a democracy.

Part tirade, part confessional, it reveals that what most people think of as “the news” is, in fact, a twisted wing of the entertainment business. In the Internet age, the press has mastered the art of monetizing anger, paranoia, and distrust. Taibbi, who has spent much of his career covering elections in which this kind of manipulative activity is most egregious, provides a rich taxonomic survey of American political journalism’s dirty tricks.

Heading into a 2020 election season that promises to be a Great Giza Pyramid Complex of invective and digital ugliness, Hate Inc. will be an invaluable antidote to the hidden poisons dished up by those we rely on to tell us what is happening in the world.

Matt Taibbi is a contributing editor for Rolling Stone and winner of the 2008 National Magazine Award for columns and commentary. His most recent book is I Can’t Breathe: A Killing on Bay Street, about the infamous killing of Eric Garner by the NY City police. He’s also the author of the New York Times’ bestsellers Insane Clown President, The Divide, Griftopia, and The Great Derangement.

Sasha Lilley is the editor of Capital and Its Discontents: Conversations with Radical Thinkers in a Time of Tumult. She is also a contributor to the Turbulence Collective’s What Would it Mean to Win?, and a co-founder and host of the Pacifica Radio program Against the Grain.