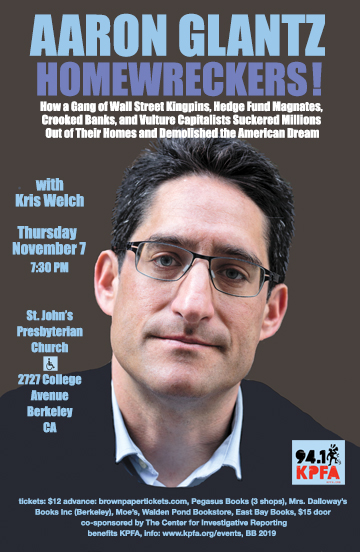 So many are living on the street now. In parks. In RVs. Thousands and thousands of homes were stolen. How did this happen? Aaron Glantz knows. A former KPFA reporter who’s won a Peabody Award, been a Pulitzer Prize finalist, and written The War Comes Home. Aaron not only knows… he tells the entire sordid business in his new book, Homewreckers, How a Gang of Wall Street Kingpins, Hedge Fund Magnates, Crooked Banks, & Vulture Capitalists Suckered Millions Out of Their Homes & Demolished the American Dream.

Aaron exposes the high class rip-offs – among them, D.Trump and cronies, who often used taxpayer money to make fortunes off the working class and the middle class. Homewreckers! shows us the mad greed that harmed or ruined millions while further fattening the gluttonous few. Glantz recounts the transformation of straightforward lending into a morass of slivered and combined mortgage “products” that could be bought and sold, accompanied by a shift in priorities and a loosening of regulations and laws that made it good business to lend money to those who wouldn’t be able to repay.

Homewreckers brilliantly weaves together the stories of those most ravaged by the housing crisis. The result is an eye-opening expose of the greed that decimated millions and enriched a gluttonous few.

Aaron Glantz is a senior reporter at Reveal who produces public interest journalism with ​impact. His reporting has sparked more than a dozen Congressional hearings, a raft of federal legislation and led to criminal probes by the Drug Enforcement Administration, the FBI and the ​Federal Trade Commission. He is also the author of three booksincluding “The War ​Comes ​Home: Washington’s Battle Against America’s Veterans.” His work has appeared in a ​broad range of media outlets, including The New York Times, NBC News, ABC News and the ​PBS NewsHour, where his work has twice been nominated for a national Emmy Award. He’s ​been given a Peabody Award, an Alfred I. duPont-Columbia University Award and Online News ​Association award.