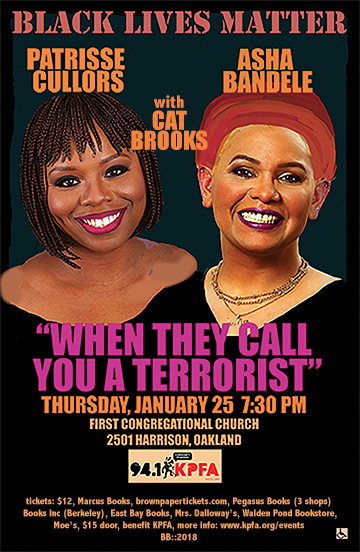 “WHEN THEY CALL YOU A TERRORIST”

The emotional and powerful story from the co-founder of the Black Lives Matter movement
and how it came to be.

It is a story our nation desperately needs to hear, especially right now. Our country has been at war with its own people for decades…This remarkable book … forces us to face the consequence of the choices our nation made when we criminalized a generation.”
—Michelle Alexander, author of The New Jim Crow

From one of the co-founders of Black Lives Matter, the hashtag that turned into a movement and global network, Patrisse Cullors, comes a poetic memoir and reflection on humanity. Necessary and timely, WHEN THEY CALL YOU A TERRORIST: A Black Lives Matter Memoir On Sale: January 16, 2018), co-written with award-winning author and journalist asha bandele, asks us to remember that protest in the interest of the most vulnerable comes from love. Leaders of the Black Lives Matter movement have been called terrorists, a threat to America. But in truth, they are loving women whose life experiences have led them to seek justice for those victimized by the powerful.

WHEN THEY CALL YOU A TERRORIST takes an intimate look at Cullors’ time growing up in Van Nuys, California, surrounded by a devoted family and supportive friends, and weaves her experiences into the larger picture of how predominantly Black and Latino neighborhoods are under constant systemic attack. From an unrelenting and hostile police presence, to disproportionate punitive action, to lack of basic social and medical services, Cullors and bandele show how lack of personal security and dignity makes daily life an act of survival.

In WHEN THEY CALL YOU A TERRORIST, a meaningful, empowering account of survival, strength, and resilience, the writers seek to change the culture that declares innocent black life expendable.

PATRISSE CULLORS is an artist, organizer, and freedom fighter from Los Angeles, CA. Co-founder of Black Lives Matter, she is also a performance artist, Fulbright scholar, public speaker, and an NAACP History Maker. In​ 2016, Patrisse received the Defender of the Dream Award from the AFL-CIO Executive Council Committee on Civil and Human Rights, the Revolution Award for Freedom from ImageNation Cinema Foundation, the Justice Award from National Center for Lesbian Rights, the Community Change Agent Award from BLACK GIRLS ROCK! Inc., and the Glamour Women of the Year Award for The Justice Seekers. In 2017, Cullors received the Sydney Peace Prize.

“Patrisse Cullors is a leading visionary and activist, feminist, civil rights leader who has literally changed the trajectory of politics and resistance in America.”
—Eve Ensler

asha bandele, author of the best-selling and award-winning memoir, The Prisoner’s Wife, and four other works, has been honored for her work in journalism, fiction, poetry, and activism. A mother and a former senior editor at Essence magazine, asha serves as a senior director at the Drug Policy Alliance.

CAT BROOKS is KPFA Radio’s UpFront Co-Host, and a long-time performer and activist. She played a central role in the struggle for justice for Oscar Grant and is the co-founder of the Anti Police-Terror Project (APTP). The actions organized by Brooks and her associates with groups that include the BlackOUT Collective, ONYX Organizing Committee and the Anti-Police Terror Project, have stood out both for their clear focus and their dramatic flair.