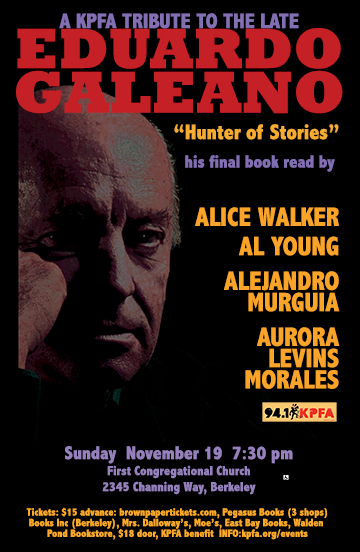 A KPFA TRIBUTE TO THE LATE

Eduardo Galeano is our world’s most lovable revolutionary

Story-hunter and gatherer Galeano has captured a covey of extraordinary tales from the wise everybodies of the world… they are medicine for our times – tales to break our hearts open and restore to us our humanity. To experience them alone is trans-formational. But to watch them soar to their full potential, they must be released from captivity and read aloud.

Eduardo Galeano (1940-2015), one of Latin America’s most distinguished writers, was born in Montevideo. He lived in exile in Argentina and Spain for years before returning to Uruguay, where he recently passed away. Among his works are: The Open Veins of Latin America, Memory of Fire (3 volumes), The Book of Embraces, Children of the Days, and Walking Words. KPFA Radio is deeply grateful to have presented him six times over the years in public benefits inevitably jampacked.

The Bay Area authors chosen to read Eduardo’s work in tribute are known for
their exceptional writings in poetry and prose, their humanity, and their
reliable solidarity.

Alice Walker is an internationally renowned American novelist, short story writer, poet, and activist. She wrote the critically acclaimed novel The Color Purple for which she won the National Book Award and the Pulitzer Prize for Fiction.

Al Young is an American poet, novelist, essayist, screenwriter, and professor. On May 15, 2005, he was named Poet Laureate of California.

Alejandro Murguia is an American poet, short story writer, editor and professor. He lives in San Francisco, where he teaches at San Francisco State University. In 2012, he was named San Francisco Poet Laureate.