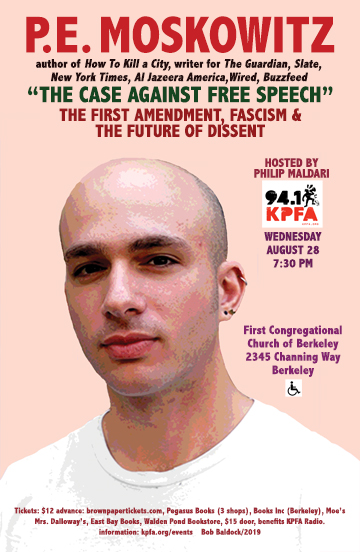 P.E. MOSKOWITZ
author of How to Kill a City, writer for the Guardian, Slate, New York Times, Al Jazeera America, Wired, Buzzfeed
“THE CASE AGAINST FREE SPEECH”
THE FIRST AMENDMENT, FASCISM & THE FUTURE OF DISSENT

P. E. Moskowitz wrote the renowned bestseller, “How To Kill a City,” which revealed the systemic forces behind the gentrification ruining such major American cities as San Francisco, New York, New Orleans and Detroit. Now, with “The Case Against Free Speech” he exposes the powerful forces and political machinations currently defining free speech, a term that has been defined and redefined to suit those in power, to give them the right to push their agenda. What’s more, our investment in the First Amendment has long obscured an uncomfortable truth: free speech is impossible in an unequal society in which a few corporations joined with the ultra-wealthy can bankroll political movements that disenfranchise millions of voters, while our government routinely silences critics of racism and capitalism.

Weaving together history and reporting from Charlottesville, Skokie, Standing Rock and many college campuses, the author argues that all these flashpoints reveal much more about the dire state of our democracy than they do about simply who is allowed to say what. This daring book takes readers directly into the battle raging over this foundational concept, from the back rooms of think-tanks where the very definition of free speech is influenced by billionaires like the Koch Brothers, to “safe spaces” on college campuses, to neo-Nazi rallies protected by the police. Moskowitz dives into the history of how free speech rights have always been reserved for those in power.

Our current definition of free speech merely replicates power while dissuaging dissent. A bright new ideal emerges in “The Case against Free Speech” – as the author makes a clear case for using speech as a tool for exposing the truth, demanding equality, and fighting for all our civil liberties.

P.E.Moskowitz is the author of the bestselling “How To Kill a City,” and a writer for Al Jazeera, The Guardian, the New York Times, Wired, the New Republic and Vice.

Philip Maldari is host and producer of the popular Sunday Morning Show (9 Am – 11 PM) on KPFA Radio.