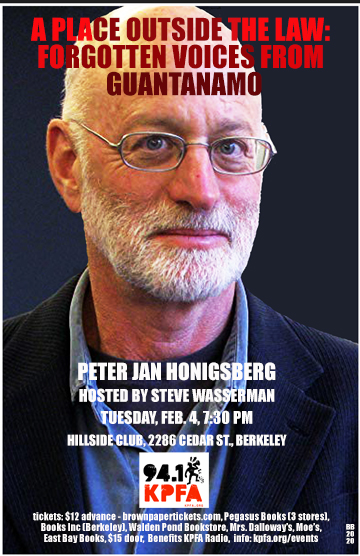 PETER JAN HONIGSBERG
​
A PLACE OUTSIDE THE LAW: FORGOTTEN VOICES FROM GUANTANAMO

Honigsberg combines his impressive research with his persistent advocacy for detainees who clearly played no role in the 9/11 attacks and who almost certainly never posed any threat to American citizens. . . . A well-documented, hard-hitting, necessary exposé.

What sets Honigsberg’s portrait apart is his focus on the lasting effects of isolation and controversial legal process on all involved. The author concludes that the United States broke the rule of law, and is the worse for it. VERDICT A sobering book for audiences interested in law and current affairs.

On January 11th, 2002, the first planeload of twenty detainees from Afghanistan arrived at the Guantanamo Bay Naval Base in Cuba. Eventually 780 Muslim men were held at Guantanamo, many for ten years or longer, and nearly all were never charged with a crime—a violation of America’s foundational belief in due process and the rule of law. Forty men are still imprisoned at Guantanamo today; twenty-six of them are considered “forever prisoners” who will likely die at Guantanamo, having never been charged, tried, or convicted of any wrongdoing.

Now, in A Place Outside the Law, Peter Jan Honigsberg, a professor at the University of San Francisco School of Law and the founder and director of the Witness to Guantanamo Project, offers the most comprehensive picture to date of the lives that were deeply and often traumatically transformed by Guantanamo. From how alleged terrorists were captured in Afghanistan and Pakistan and sold to the US to the Bush administration’s use of the term “enemy combatant” to bypass the Geneva Conventions, Honigsberg details how the law was broken in the name of protecting Americans — and how that lawlessness was experienced by everyone who came into contact with Guantanamo.

The stories in the book—and the full-length filmed interviews held in perpetuity at the Duke University Human Rights Archive—are the only record of many of the people who were at Guantanamo. “Their witness,” cautions Honigsberg, “will remind future generations not to repeat what has happened there.”

Peter Jan Honigsberg is a professor at the University of San Francisco School of Law and the founder and director of Witness to Guantánamo. His research and teaching focuses on the rule of law and human rights violations that occurred in the detention center in Guantánamo, as well as on the study of terrorism and post-9/11 issues. His books include Our Nation Unhinged: The Human Consequences of the War on Terror and Crossing Border Street: A Civil Rights Memoir. Honigsberg lives in Berkeley, California.