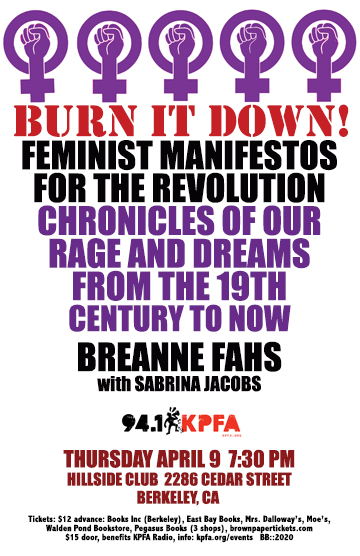 ↔
CANCELED
Regrets: All March and April Events have been cancelled due to public health concerns.
BURN IT DOWN!
FEMINIST MANIFESTOS FOR THE REVOLUTION
CHRONICLES OF OUR RAGE AND DREAMS
FROM THE 19TH CENTURY TO NOW
BREANNE FAHS
with SABRINA JACOBS

The most comprehensive collection of feminist manfestos, chronicling women’s rage and dreams from the nineteenth century to today.

This landmark collection spanning three centuries and four waves of feminist activism and writing, BURN IT DOWN! Is a unique testament to what is possible when women are driven to the edge. The manifesto itself – raging and wanting, quarreling and provoking – has always played a vital role in feminism, and it is the angry, brash feminism that is needed right now.

Collecting over seventy-five manifestos from around the world, BURN IT DOWN! Is an international rallying cry and a forceful call to action. Among this confrontational sister- hood is “Dyke Manifesto” by the Lesbian Avengers, Simone de Beauvoir’s pro-abortion “Manifesto of the 343”, “Double Jeopardy: To Be Black and Female” by Frances M. Beal; “Zapatista Women’s Revolutionary Laws”, “Riot Grrrl Manifesto” by Bikini Kill; and “Anarchy and the Sex Question” by Emma Goldman.

Breanne Fahs argues that we need manifestos in all their urgent rawness — their insistence that we have to act now, that we must face this, that the bleeding edge of rage and defiance ignites new and revolutionary possibilities from which entirely new ideas are born.

Breanne Fahs is Professor of Women and Gender Studies at Arizona State University. She is the author of Performing Sex, Valerie Solanas, Out for Blood, and Firebrand Feminism, as well as co-editor of The Moral Panics of Sexuality, and Transforming Contagion. She is the Founder and Director of the Feminist Research on Gender and Sexuality Group at Arizona State University, and she works as a Clinical Psychologist.

Sabrina Jacobs is host and producer of the popular A Rude Awakening, aired on KPFA Radio Monday afternoons. She covers local breaking news as well as global events, Informing listeners about the latest social injustices. Ms. Jacobs is also currently serving as staff representative/vice chair of Pacifica Radio’s National Board.