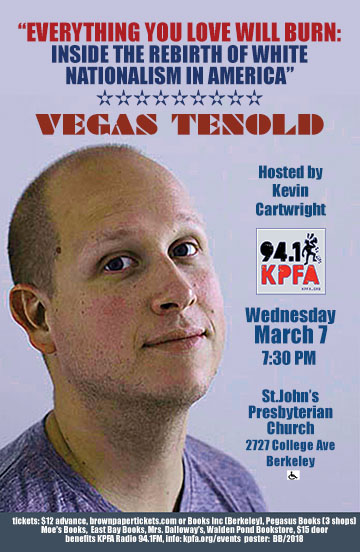 VEGAS TENOLD
Everything You Love Will Burn:
Inside the Rebirth of White Nationalism in America

Everything You Love Will Burn takes readers to the dark, paranoid underbelly of America, where the white race is under threat and the enemy is everywhere.

Born and raised in Norway, now living in Brooklyn, Vegas Tenold is an award-winning journalist. For years he has covered the far right in America, as well as human rights In Russia, conflict in central Africa and the Middle East, and national security in the United States. A graduate of Columbia University’s School of Journalism, he has published work in the New York Times, Rolling Stone, New Republic, and Al Jazeera America.

Six years ago, when Tenold began reporting from the inner circle of three American white Nationalist groups—the KKK, the Nartional Socialist Movement, and the Tradionalist Workers Party—he found himself deep in the midst of small, disorganized groups operating well outside the mainstream, and often covertly. But as the deadly “Unite the Right” rally in Charlottesville made clear, all that has changed. Everything You Love Will Burn is a startling inside look at these newly empowered movements, from their violent conventions to their backroom meetings with Republican operatives.

Tenold introduces us to neo-Nazis in Brooklyn, a millennial Klanswoman in Tennessee, and a rising star in the far right movement nicknamed “the Little Fuhrer,” who sent Tenold a text on election night gloating, “Everything you love will burn.” Alternately frightening and fascinating, Everything You Love Will Burn shows us the onrushing future of hatred in America.

Kevin Cartwright has been a radio producer, media trainer and music programmer for Pacifica Radio station KPFA-FM since 1994.  He has produced and contributed to a number of local and national public affairs programs that have included Living Room with Larry Bensky, Democracy Now, the KPFA Evening News, and The Morning Show. Kevin is a communications strategist who continues to work with a number of local, state and national social change organizations across the country to help improve their overall communication and PR strategies, framing and messaging apparatus, media engagement and social media. Currently, Kevin is completing two short fiction works, Oakland and Slow Dancing In Babylon, as well as a suite of dramatic plays covering the past 60 years of West Oakland.