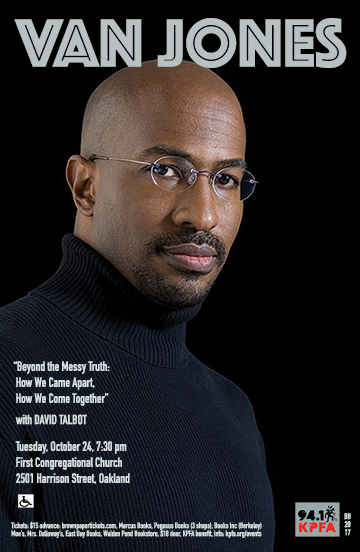 Beyond the Messy Truth, How We Came Apart, How We Come Together

We should all be listening to Van Jones… His vision for American politics calls forward the best of who we are, so that we can engage with humanity and solve real problems together.

Those of us who truly believe in the power of love and aloha welcome Beyond the Messy Truth with open arms, in the hope that it will be read by those from all parts of the country and all points on the political spectrum. This book will help start conversations and bring people together to find common ground and work toward a better America.

Whether you agree or disagree with him, Van Jones’s voice has become an integral part of our national political debate. He is one of the most provocative and interesting political figures in the country.

Van Jones is a CNN political contributor and host of the recurring CNN primetime special The Messy Truth with Van Jones. A graduate of the University of Tennessee and Yale Law School, he was a special adviser to the Obama White House and is the author of two New York Times bestsellers. Jones founded the social justice accelerator the Dream Corps and has led numerous social and environmental justice enterprises, including the Ella Baker Center for Human Rights, Color of Change, and Green For All. He has earned many honors, including the World Economic Forum’s “Young Global Leader” designation and a Webby Special Achievement Award, and he has been named one of Rolling Stone’s 12 Leaders Who Get Things Done, and Time’s 100 Most Influential People in the World.

David Talbot  is an American progressive journalist, author and media executive. He is the founder, former CEO and editor-in-chief of one of the first web magazines, Salon, which he founded in 1995, Talbot has worked as a senior editor for Mother Jones magazine and a features editor for The San Francisco Examiner, and has written for Time magazine, The New Yorker, Rolling Stone, and other publications. His other books include Brothers: The Hidden History of the Kennedy Years, Devil Dog, Season of the Witch: Enchantment, Terror, and Deliverance in the City of Love, and the recent The Devil’s Chessboard: Allen Dulles, the CIA,and the Rise of America’s Secret Government.