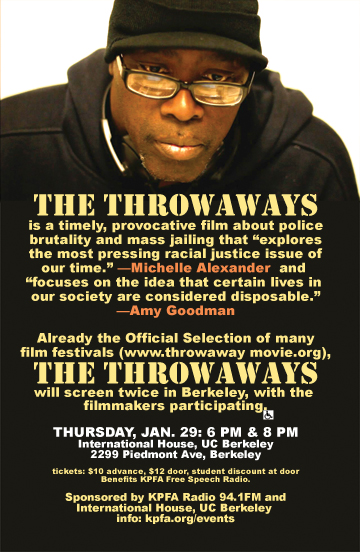 The Throwaways is the story of homeless filmmaker and ex-felon, Ira McKinley, documenting his struggle to bring positive changes to his community in inner-city Albany, NY. As he strives to get his voice heard and capture the stories of people living on the margins, McKinley confronts the unavoidable stories of his past and battles against the stigma of being formerly incarcerated. Guided by this personal narrative of survival, The Throwaways is a timely and provocative look at the impact of mass incarceration and police brutality on black males in America.

More than an illumination of marginalized people at their weakest moments; this film is a call to action, a story of directly engaging in the fight for justice.

Already the Official Selection of many film festivals, THE THROWAWAYS will screen twice in Berkeley, with the filmmakers participating.

“The Throwaways courageously explores the most pressing racial justice issue of our time: the mass incarceration and racial profiling of poor people of color.”