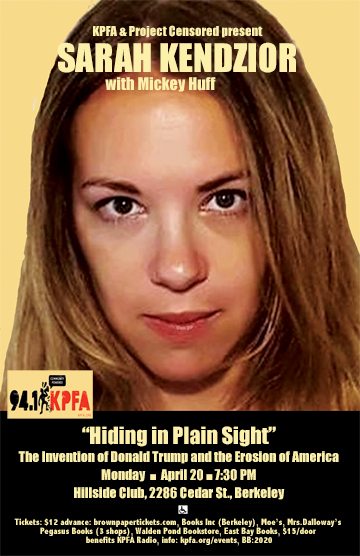 ↔
CANCELED
Regrets: All March and April Events have been cancelled due to public health concerns.

SARAH KENDZIOR
Hiding in Plain Sight:
The Invention of Donald Trump and the Erosion of America
with Mickey Huff

Hiding in Plain Sight is a story that has been buried from us, because people in power wanted it that way. Her narrative reveals the inherent fragility of our democracy, the persistent rise of corporate corruption, the erosion of our civil liberties, and the dark secrets behind a burgeoning autocratic United States that have been hiding in plain sight for decades. She also offers a never-before-seen look at her own experience of living in New York through the grim era of 9/11, then in St.Louis during the Ferguson uprising, and then researching media and authoritarianism as Trump emerged using essentially the same tactics as the post-Soviet dictatorships she had long studied. While it is a terrible, depressing feeling to sense the threat coming, it is even worse if we permit apathy, paralyzing doubt and fear to thwart us from preparing ourselves. Hiding in Plain Sight confronts the injustice too long ignored. Knowing the truth is a sure way of arming ourselves against fascism.

Sarah Kendzior is also the author of the bestselling “The View from Flyover Country.” An op-ed columnist for The Globe and Mail, she was named one of Foreign Policy’s “100 people you should be following on Twitter to make sense of global events.” Her reporting has been featured in Politico, The Atlantic, Fast Company, and The New York Times.

Mickey Huff is the Director of Project Censored, President of the Media Freedom Foundation, and executive producer/co-host of the Project Censored Show on Pacifica Radio. His latest books include Censored 2020: Though the Looking Glass (co-edited with Andy Lee Roth) from Seven Stories Press and United States of Distraction: Media Manipulation in Post-Truth America (And What We Can Do About It) co-authored with Nolan Higdon from City Lights Publishing. He is currently professor of social science and history at Diablo Valley College, where he is co-chair of history as well as the chair of the journalism program. www.projectcensored.org