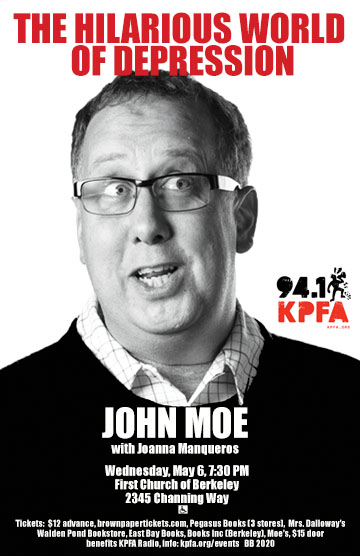 JOHN MOE
The Hilarious World of Depression
With Joanna Manqueros

For years John Moe, critically-acclaimed public radio personality, struggled with depression. It plagued his family and took the life of his brother in 2007. Facing his own illness, he began to see similar behavior patterns and copy mechanisms in his conversations with others. Recognizing the tremendous comfort and community in talking about these experiences, and knowing that humor has a unique power, he launched the The Hilarious World of Depression podcast, which has already had more than ten million downloads

This memoir, published during Mental Health Awareness Month, is inspired by that podcast. It is a memoir of Moe’s own journey, revealing much more than he’s ever discussed before. The book is also a high-spirited trove of laugh-out-loud stories and sharp insights from his interviews with comedians, musicians, writers and other public figures who have dealt with depression, including Margaret Cho, Andy Richter, john Green, Jenny Lawson, Maria Bamford, Peter Sagal, Dick Cavett and Hannah Hart.

“I was inspired by the illness that I’d carried around most of my life,” John Moe says, “and how society has insisted we keep quiet about it, although not being quiet is one of the best things we can do. I wrote this book to tell people thaat they’re not alone, it can get better, and we can even have some laughs along the way.”

This book is an excellent life raft for those of us who are so sure that we are alone in our struggles. You should read it.

Candid, funny, and intimate. Deeply moving and life-affirming. An ode to the blues that makes you feel better about being human.

…this is a very serious book that also manages to be very funny about things we are not supposed to laugh at.

Joanna Manqueros graduated from Berkeley High School, UC Berkeley, and SF State University. She is a Licensed Clinical Social Worker and has worked for 25 years in the Department of Psychiatry, a diverse outpatient clinic in Oakland. She hosts Music of the World Live the first Saturday of the month on KPFA.