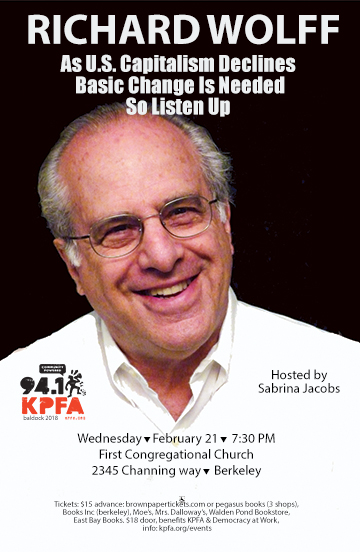 RICHARD WOLFF
As U.S. Capitalism Declines, Basic Change is Needed, So Listen Up

We have the dreadfully ominous prospect of President Donald Trump – just as the U.S. is sinking ever deeper into hard times for the vast majority of the population. More economic downturns are coming. Capitalism’s instability, inequalities, and failures to meet our needs are provoking rising opposition. Considering the increasing problems of drought, poverty, debts, job conditions, and a worsening environment, the American dream is now a past vision. Our political leaders are controlled by corporate giants and lobbies. Democracy fizzles. North Korea provokes.

In 1988 Wolff co-founded the journal Rethinking Marxism. Later he published Capitalism Hits the Fan: The Global Economic Meltdown and What To Do About It. This was followed by Occupy the Economy: Challenging Capitalism (with David Barsamian), Contending Economic Theories: Neoclassical, Keynesian and Marxian (with Stephen Resnick), and Democracy at Work. The New York Times Magazine has named him “America’s most prominent Marxist economist.” Economic Update is a weekly program hosted by Richard D. Wolff and is played on over 60 stations nationwide.

Sabrina Jacobs is the host and producer of the popular A Rude Awakening, aired on KPFA, Mondays 3:30 – 4pm. She covers local breaking news as well as global events, informing listeners about the latest social injustices. Ms. Jacobs is also currently serving as staff representative/vice chair of Pacifica Radio’s National Board.