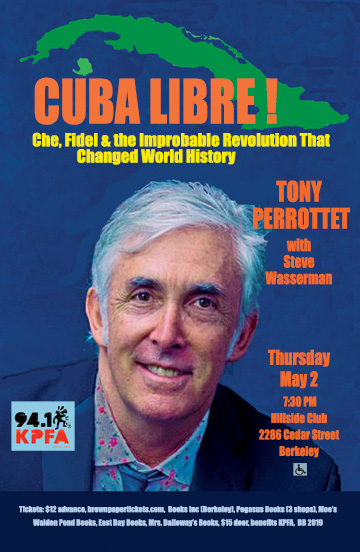 The surprising story of Che Guevara, Fidel Castro, Celia Sanchez, and the scrappy band of young men and women who followed them. Cuba Libre! is an absorbing look back at a liberation movement that captured the world’s imagination with its spectacular drama, foolhardy bravery, tragedy, and, sometimes, high comedy— that set the stage for Cold War tensions that pushed the world to the brink of nuclear war.

Most people are familiar with the basics of the Cuban Revolution of 1956–1959. It was led by two of the twentieth century’s most charismatic figures, Fidel Castro and Che Guevara. Their movement successfully overthrew the island nation’s US–backed dictator, Fulgencio Batista, and has remained to this day an intense socialist provocation to the massive imperial capitalist country only ninety miles north of Cuba.

Less is remembered about the stirring amateur nature of the movement or the lives of its players. In this wildly entertaining, meticulously researched account, historian and journalist Tony Perrottet unravels the human drama behind history’s most improbable revolution: a scruffy handful of self-taught revolutionaries—many of them kids just out of college, literature majors and art students, including a number of extraordinary young women—who defeated 40,000 professional soldiers to overthrow the dictatorship of Batista. Cuba Libre!’s deep dive into the revolution reveals fascinating details. He describes how Fidel’s highly organized lover Celia Sánchez kept the male guerrillas disciplined, and he portrays a few of the North American volunteers who joined the Cuban rebels. He gained access to private letters, diaries, videos, and other documents no other historian has seen. Perrottet has used these as well as countless interviews to describe the years of guerrilla fighting throughout the Sierra Maestra mountains, the final victory march into Havana, the gradual building of a socialist state, and
the accompanying Cold War tensions.

“Perrottet takes us far beyond the basic facts of the Cuban Revolution to the juicy details that remind us that history is deeply human.”
— Chris Ryan, NY Times bestselling author.

Tony Perrottet, author of five previous books, is a regular guest on the History Channel and a contributing writer at Smithsonian Magazine. His work has also appeared in The New York Times, The Wall Street Journal, and the London Sunday Times.

Steve Wasserman, Executive Director of Heyday Books, was formerly a deputy assistant editor of the LA Times Sunday opinion pages, after which he became editor in chief of New Republic Books. He has also served as editorial director of Times Books and publisher of Hill & Wang. He returned to the LA Times in 1996 to become editor of the Book Review.