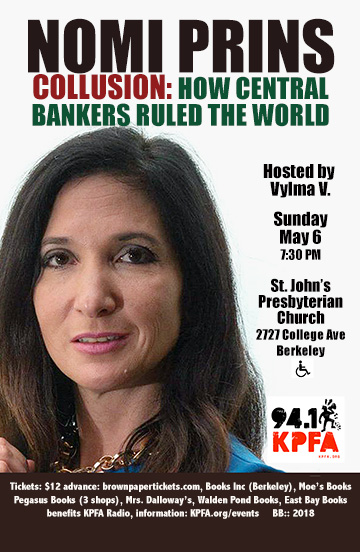 The 2008 financial crisis unleashed a chain reaction that turbo-boosted the influence of central Bankers and triggered a massive shift in the world order. Central banks and institutions like the IMF are overstepping the bounds of their mandates and directing the flow of money without any checks or balances. Meanwhile, the open door between private and central banking ensures endless manipulation against a backdrop of government support. Packed with details about the power players who orchestrate intewrnational finance—from Janewt Yellen and Mario Draghi to Ben Bernanke and Christine Lagarde—Collusion casts an unflinching spotlight on the dark conspiracies and unsavory connections within the halls of power.

Prins is that rare combination of real-world expertise, scholarly method, and a brilliant writing style. Collusion is urgent and timely. A must-read for savers, students, journalists, and public officials.
— James Rickards, bestselling author of Currency Wars

Praise for Nom Prins’ earlier book, All the Presidents’ Bankers:

Nomi Prins follows the money. She used to work on Wall Street. And now she has written a seminal history of America’s bankers and their symbiotic relationship with all the presidents from Teddy Roosevelt through Barack Obama. It is an astonishing tale. “All the Presidents Bankers” relies on the presidential archives to reveal how power works in this American Democracy. Prins writes in the tradition of C. Wright Mills, Richard Rovere and William Greider. Her book is a stunning contribution to the history of the American Establishment.
—Kai Bird, Pulitzer Prize winning biographer

Vylma V is a Puerto Rican activist, human rights attorney, and former deputy public defender in Santa Clara County.  On KPFA Radio, she is the DJ for the Music Show, Ritmo (2nd Saturdays), a frequent sub for The Talkies, and a La Raza Chronicles’ producer.  She is also the executive producer of Goddess on the Radio, a feminist spirituality program which airs on KPFB 89.3 every Saturday at 2pm.