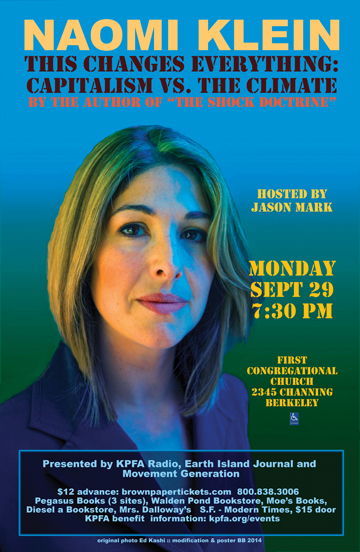 This Changes Everything: Capitalism vs. The Climate

by the author of “The Shock Doctrine”

Here is the most important book yet from the author of the international bestseller,
The Shock Doctrine. This Changes Everything: Capitalism vs. The Climate clearly
explains why we must soon abandon the core free market ideology of our time, restructure the global economy, and remake our political systems. In short, either we embrace radical change, or radical changes will be violently visited upon us. Status quo is no longer an option.

Naomi Klein argues that climate change is not merely another issue to shrug off and file away for the future. It is an alarming certainty that demands we fix an economic system already failing in many terrible ways. Klein meticulously presents the case for how massively reducing our greenhouse emissions is our best chance to simultaneously reduce the growing inequalities, re-imagine our broken democracies, and rebuild our gutted local economies. She exposes the ideological desperation of climate-change deniers, the messianic delusions of would-be geo-engineers, and the tragic defeatism of far too many mainstream green initiatives. She demonstrates precisely why the market has not and can not fix the climate crisis, and will in fact make things worse, with ever more extreme, ecologically damaging extraction methods, accompanied by rampant disaster capitalism.

Klein reveals how the changes to our relationship with nature and one another that are required to respond humanely to this crisis should not be viewed as grim penance, but as a kind of gift – a catalyst to transform broken economic and cultural priorites and heal long-festering historical wounds. She documents the inspiring movements already involved, communities not simply refusing to be sites of further fuel extraction, but already building the next regeneration-based economies.

Naomi Klein is an award-winning journalist and the author of the critically acclaimed #1 international bestseller The Shock Doctrine: The Rise of Disaster Capitalism and of No Logo: Taking Aim at the Brand Bullies, which The New York Times called “a movement bible.” Klein is a contributing editor for Harper’s Magazine, a reporter for Rolling Stone, and a syndicated columnist for The Nation and The Guardian. She is a member of the board of directors of 350.org and a Puffin Foundation Writing Fellow at The Nation Institute.

Jason Mark is a co-manager at San Francisco’s Alemany Farm and the editor of the quarterly environmental magazine, Earth Island Journal. He is also a co-author of Building the Green Economy: Success Stories from the Grassroots.