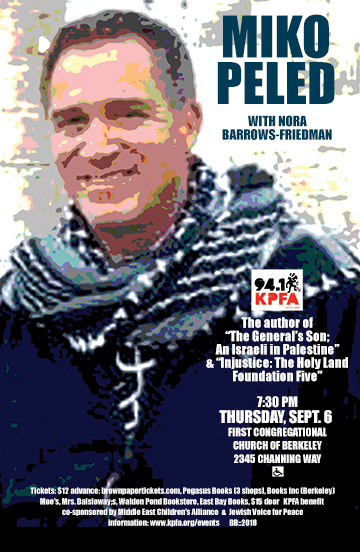 MIKO PELED
with Nora Barrows-Friedman
The author of: The General’s Son: Journal of an Israeli in Palestine and Injustice: The Story of the Holy Land Foundation Five

The General’s Son: Journal of an Israeli in Palestine 2nd edition

This is a brilliantly rendered father and son saga amidst a background that evokes Greek mythology. .. is a story of admiration and anger.
–Sy Hersh

There are few books on the Israel/Palestine issue that seem as hopeful to me as this one.
— Alice Walker

Matti Peled, the general of the title, was a remarkable personality. An underground Fighter, a combat soldier and an architect of the Israeli army that won the Six Day War, he was a militaristic hawk before becoming a peace activist. The man who pushed the Israeli government into the war turned into one of the most implacable enemies of the occupation that resulted from it. During the twenty years we were close associates in this endeavor, I sometimes wondered how it was for a boy to grow up in the shadow of such a headstrong father. In this candid account, Miko Peled tells us how he followed in the footsteps of the general, from parachutist to fighter for peace, although his 12-year-old niece was killed by suicide bombers. A fascinating story that provides much food for thought.
—Uri Avnery, veteran Israeli peace activist and former member of Knesset

This new edition contains an Epilogue that takes readers with Peled on his travels around the world to promote his message of personal discovery and peacemaking to South Africa, Easst Asia,Europe, the West Bank, Gaza, and Israel itself. He also reflects further on his continuing inner journey.

Injustice: The Story of the Holy Land Foundation Five

Miko Peled shines a light on one of the most egregious cases of injustice committed to date against Muslim leaders in the United States. ..an ominous and important warning about the degradation of the rule of law and civil liberties that increasingly characterizes the United States
— Chris Hedges, Pulitzer Prize-winning journalist & former Middle East Bureau Chief for The New York Times

Nora Barrows-Friedman is a journalist, Assoc Editor of Electronic Intifada, author of “In Our Power: U.S. Students Organize for Justice in Palestine”, and frequent KPFA Flashpoints’ guest.