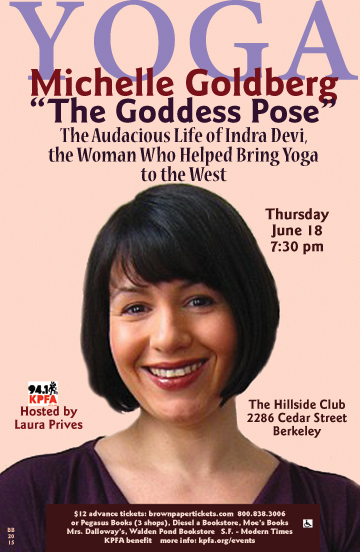 The Audacious Life of Indra Devi, the Woman Who Helped Bring Yoga to the West

When the woman who would become Indra Devi was born in Russia in 1899, yoga was virtually unknown outside of India. By the time of her death, in 2002, yoga was being practiced everywhere, from Berkeley to Berlin to Ulaanbaatar. In The Goddess Pose, New York Times best-selling author Michelle Goldberg describes the life of the astonishing woman who brought yoga to the west.

Born into the minor aristocracy (as Eugenia Peterson), Devi grew up in the roiling midst of one of the most turbulent periods in human history. Forced to flee the Russian Revolution as a teenager, she joined a famous Berlin cabaret troupe, dove into the vibrant prewar spiritualist movement, and – at a time when it was unthinkable for a young European woman to travel alone – followed the charismatic Theosophical leader Jiddu Krishnamurti to India. Once there, she performed in Indian silent cinema and hobnobbed with the leaders of the independence movement. But her greatest coup was convincing a recalcitrant master yogi to train her in the secrets of his art.

Devi went on to share what she learned with people around the world, teaching in Shanghai during World War II, then in Hollywood, where her students included Greta Garbo and Gloria Swanson. She ran a yogi school in Mexico during the height of the counterculture, served as spiritual advisor to the colonel who tried to overthrow Panamanian strongman Manuel Noriega, and, in her eighties, moved to Buenos Aires at the invitation of a besotted rock star.

Everywhere she went, Indra Devi evangelized yoga, ushering in the global craze that continues unabated. Written with vivid clarity, The Goddess Pose brings to life her unique story, as an actress, yogi, and globetrotting adventuress.

Michelle Goldberg is an investigative journalist and author of Kingdom Coming: The Rise of Christian Nationalism, which was a New York Times bestseller. A former senior writer at Salon.com, her work has appeared in The New Republic, Rolling Stone, The Guardian, and many other publications.

Laura Prives is the Program Director at KPFA Radio, and an ardent yoga practitioner.