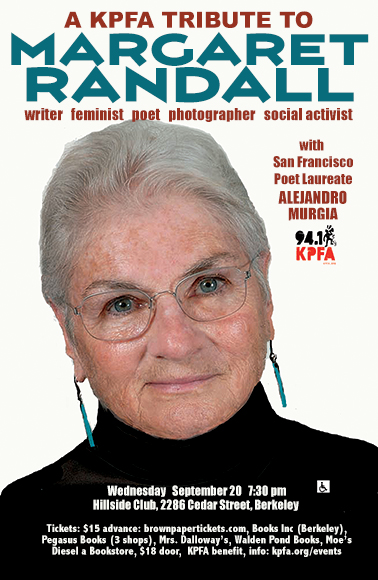 This rare tribute by KPFA is presented to honor the life and work of an author who has shown exceptional creativity and a lifelong striving for justice and equality.

Margaret Randall, born in New York City, is a  writer, photographer, poet, activist and academic. She lived for many years in Spain, Mexico, Cuba, and Nicaragua, and spent time in North Vietnam during the last months of the U.S. war in that country. She has written extensively on her experiences abroad and back in the United States, and has taught at Trinity College in Hartford, Connecticut, and several other colleges.

Randall moved to Mexico in the 1960s, married Mexican poet Sergio Mondragon and gave up her American citizenship. She moved to Cuba in 1969, where she deepened her interest in women’s issues and wrote oral histories of mainly women, “wanting to understand what a socialist revolution could mean for women. Her 2009 memoir To Change The World: My Years in Cuba chronicles that period of her life. She lived in Managua, Nicaragua, from 1980 to 1984, writing about Nicaraguan women, before returning to the U.S. after an absence of 23 years.

Shortly afterward she was ordered deported under the McCarran-Walter Act of 1952. The government’s case rested on two arguments. First, while living in Mexico and married to a Mexican citizen, she had taken out Mexican citizenship, thereby presumably losing her U.S. citizenship.This was in 1967. In addition, under McCarran-Walter, the government claimed that the opinions Randall expressed in several of her books were “against the good order and happiness of the United States”. The INS district director gave the justification that “her writings go far beyond mere dissent.” With the support of many well-known writers and others, Randall won a Board of Immigration Appeals case in 1989, ordering the INS to grant her permanent residence.

Among her best-known books are Cuban Women Now, Sandino’s Daughters,  and When I Look into the Mirror and See You: Women, Terror and Resistance. Recent books include Che On My Mind (essay), The Rhizome as a Field of Broken Bones (poetry), and Haydée Santamaría, Cuban Revolutionary: She Led by Transgression.To Change the World: My Years in Cuba (memoir, with photos).