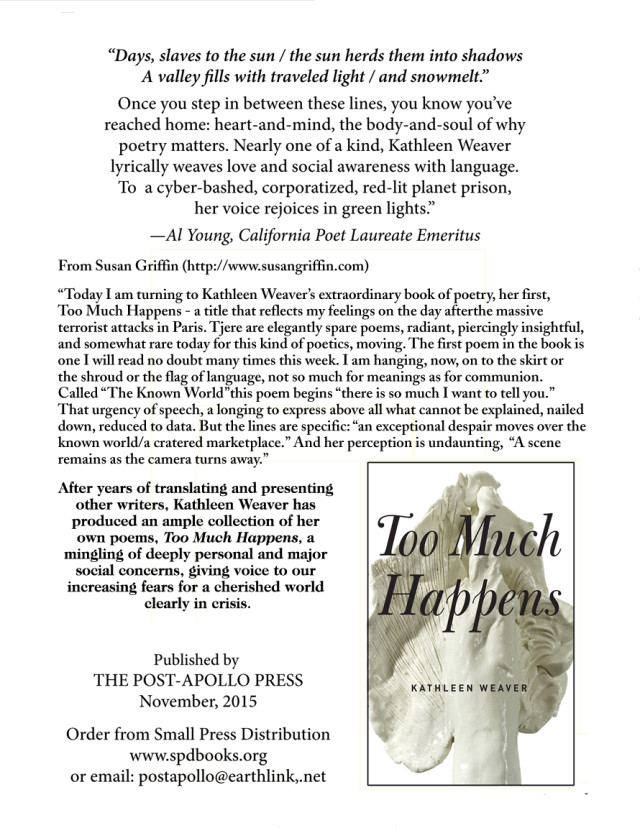 Reading from her latest book of poems Too Much Happens

Please gather with her!

about Too Much Happens:

After years of translating and presenting other writers, Kathleen Weaver has now produced a collection of her own poems, Too Much Happens, a collection that mingles personal and major social concerns in an attempt to give voice to a sense of increasing fear for a cherished world in crisis. Catastrophic wars, child soldiers, dried lake beds, the relentless onslaught of bad news. “What shall we do with what we know?” Too Much Happens poses a question for which no answer is clear in a world skirting a perilous edge.

“Days, slaves to the sun, / the sun herds them into shadows. // A valley fills with traveled light / and snowmelt.” Once you step in between these lines, you know you’ve reached home: heart-and-mind, the body-and soul of why poetry matters. Nearly one of a kind, Kathleen Weaver lyrically weaves love and social awareness with language. To a cyber-bashed, corporatized, red-lit planet prison, her bright voice rejoices in green-lights.”
—Al Young

“The poems in this book move simultaneously toward clarity and compassion, traveling through geological time to achieve a perspective in which the contemporary world’s cruelties and depredations can be faced, free of rhetoric and posturing, with an ascetic, often witty justice.”
—Alissa Valles

“A profoundly brilliant book of poems in which fragmentation and estrangement are the sustaining features . . .Kathleen Weaver braves the zone of non-existence and emerges with her own refusal to be disappeared, even though goodbye is one of the central themes of a life that, though in splints, cannot be mended because it is the brokenness that is paradoxically the affirmation she hopes to evoke.”
—Jack Hirschman