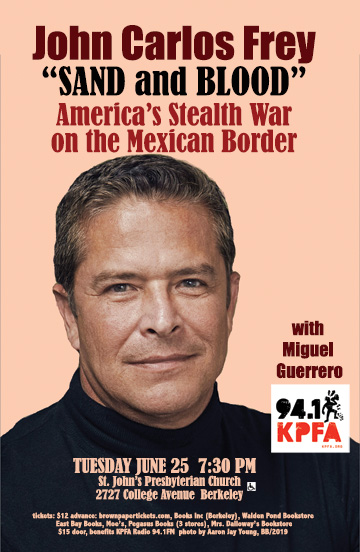 “Sand and Blood: America’s Stealth War on the Mexico Border” is a damning portrait
of the southern border, where militaristic fantasies are being unleashed and violent technologies are being tested, always targeting impoverished immigrants.

The groundwork for our current situation began in the 1980s and 1990s. But after 9/11, while Americans’ attention was trained on the Middle East, a War on Terror was ramping up on our own soil—aimed not at terrorists but at economic migrants, refugees, and families from South and Central America seeking jobs, safety, and freedom in the US. The Border Patrol grew exponentially, ICE detention centers cropped up across the country, and the southern border has become more militarized than ever before. But we are no safer. Instead, families are being ripped apart, undocumented people are living in fear, and thousands of migrants have died in detention or crossing the border.

“John Carlos Frey is one of the finest examples I know of a journalist who cares.
His tireless efforts for years to expose injustices along America’s southern border are particularly impressive when gathered together in one book. We need more … journalists like this.”
—Fred Peabody, director, All Governments Lie and The Corporate Coup d’État

John Carlos Frey is an investigative reporter and documentary filmmaker based in Los Angeles. A five-time Emmy Award winner, he is a special correspondent for PBS NewsHour, a former correspondent for The Marshall Project, and a longtime Type Investigations journalist at the Type Media Center. His investigative work has been featured on 60 Minutes, PBS, and Dan Rather Reports, and in the Los Angeles Times, the Huffington Post, Salon, Need to Know online, the Washington Monthly, and El Diario. His documentary films include “The Invisible Mexicans of Deer Canyon”, “The Invisible Chapel”, “The 800 Mile Wall”, and “The Real Death Valley.” He is the 2012 recipient of the Scripps Howard Award, the Sigma Delta Chi award, the IRE Medal, and the Polk Award, among others, for his investigative work.

Miguel Guerrero was born in Michoacán, Mexico, and has been working for KPFA since 2004. He Is a graduate of the KPFA Apprenticeship Program and is currently the Technical Producer for the Music Department. Miguel hosts the weekly Latin alternative music show Rock en Rebelión, which includes commentaries on social and political issues. He also contributes to the programs La Raza Chronicles and Ritmo.