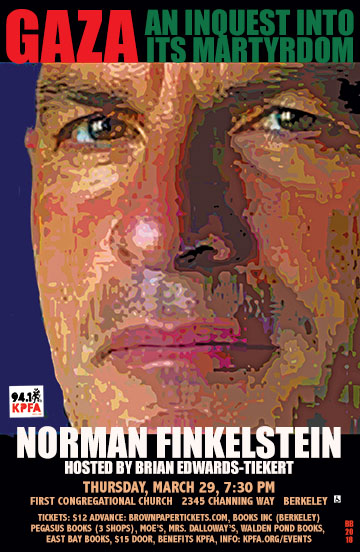 GAZA
AN INQUEST INTO ITS MARTYRDOM
Norman Finkelstein

The Gaza Strip is among the most densely populated places in the world. More than two-thirds of its inhabitants are refugees, more than half are under eighteen years of age. Since 2004, Israel has launched eight devastating “operations” against Gaza’s largely defenseless population. Thousands have perished. Tens of thousands have been left homeless. Throughout all of this, Israel has subjected Gaza to a merciless illegal blockade.

Based on scores of human rights reports, Norman G. Finkelstein’s new book presents a meti-culously researched inquest into Gaza’s martyrdom. He shows that although Israel has tried to justify its assaults in the name of self-defense, in fact Israel’s actions constitute flagrant violations of inter-national law. Finkelstein also documents that the guardians of international law—from Amnesty International and Human Rights Watch to the UN Human Rights Council—ultimately failed Gaza. One of his most disturbing conclusions is that, after Judge Richard Goldstone’s humiliating retraction of his UN report, human rights organizations succumbed to the Israeli juggernaut. Finkelstein’s magnum opus is both a monument to Gaza’s martyrs and an act of resistance against the forgetfulness of history.

No scholar has done more to shed light on Israel’s ruthless treatment of the Palestinians than Norman Finkelstein. In Gaza, he meticulously details Israel’s massacres… while demolishing the myths Israel and its supporters have invented to disguise these shocking events.

Norman Finkelstein has the moral gravity of an Old Testament prophet, the scrupulous attention to detail of a Talmudic scholar, and the mordant sense of humor of a Yiddish novelist. All these attributes are on display in Gaza: An Inquest into its Martyrdom, an indictment of Israel’s crimes in the overcrowded Palestinian territory from 2008 up to the present.

Finkelstein has been at the top of Hasbara Central’s Enemies List for more than 3 decades. Over the years, the pro-Israel forces have slandered him, tried to deprive him of his teaching career, and even sought to prevent him from publishing. … The hasbarists will certainly try to discredit his new book on Gaza. They should be daunted by the fact that he has never once been successfully challenged on matters of fact and hard evidence. Never once.

Brian Edwards-Tiekert is the founder and co-host of UpFront, the morning drive-time public affairs program on KPFA Radio. He started his work in media helping to set up the Independent Media Center in Chiapas, Mexico, where he also did human rights work. For two years, he ran a nationwide support program for progressive publications at colleges and universities. He started at KPFA as a beat reporter