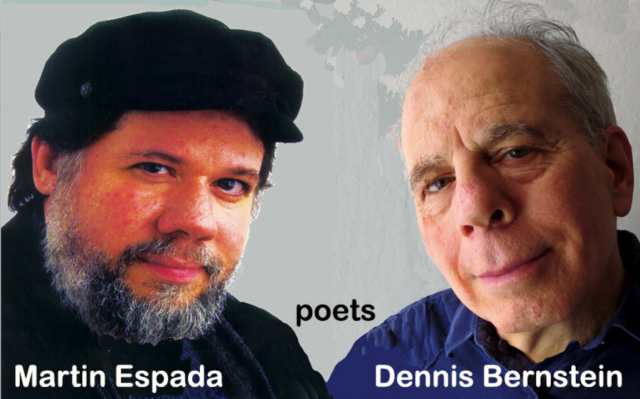 MARTIN ESPADA http://www.martinespada.net has published more than twenty books as a poet, editor, essayist and translator, including Vivas to Those Who Have Failed and Pulitzer finalist The Republic of Poetry. His many honors include the Ruth Lilly Prize, the Shelley Memorial Award, and a Guggenheim Fellowship. Born in Brooklyn, he now lives in western Massachusetts.

Martín Espada is a poet who “stirs in us an undeniable social consciousness,” says Richard Blanco. Floaters offers exuberant odes and defiant elegies, songs of protest and songs of love from one of the essential voices in American poetry.

Floaters takes its title from a term used by certain Border Patrol agents to describe migrants who drown trying to cross over. The title poem responds to the viral photograph of Óscar and Valeria, a Salvadoran father and daughter who drowned in the Río Grande, and allegations posted in the “I’m 10-15” Border Patrol Facebook group that the photo was faked. Espada bears eloquent witness to confrontations with anti-immigrant bigotry as a tenant lawyer years ago, and now sings the praises of Central American adolescents kicking soccer balls over a barbed wire fence in an internment camp founded on that same bigotry. He also knows that times of hate call for poems of love—even in the voice of a cantankerous Galápagos tortoise.

Whether celebrating the visionaries—the fallen dreamers, rebels and poets—or condemning the outrageous governmental neglect of his father’s Puerto Rico in the wake of Hurricane María, Espada invokes ferocious, incandescent spirits.

DENNIS BERNSTEIN, a poet and investigative journalist, is the award-winning producer of Flashpoints, heard weekdays at 5PM on KPFA, 94.1FM throughout northern California and syndicated on public and community radio stations across the country. His essays have appeared in numerous newspapers, magazines and websites. His artists’ books French Fries and GRRHHHH are in many museum collections.

Brilliant and beautiful. I love it! Thank you for bringing in the new.

His latest book of poems is the prize-winning Five Oceans in a Teaspoon: a memoir in short visual poems, with typographic visualizations by designer/author Warren Lehrer. Like his journalism, Bernstein’s poems reflect the struggle of everyday people trying to survive in the face of adversity. Divided into eight chapters, it spans a lifetime: growing up confused by dyslexia and a parent’s alcoholism; graced by pogo sticks, boxing lessons and a mother’s compassion; becoming a frontline witness to war and its aftermaths, to prison, street life, poverty, love and loss, to open heart surgery, caring for aging parents and visitations from them after they’re gone. Lehrer’s typographic compositions give form to the interior, emotional and metaphorical underpinnings of the poems. Together, the writing and visuals create a new whole that engages the reader to become an active participant in the navigation, discovery, and experience of each poem.

“Bernstein and Lehrer—the Lennon and McCartney of viz-lit—have reunited at the height of their creative powers. Five Oceans in a Teaspoon speaks to the madness, vulnerability, aspiration and language of our time. The gutsiness and raw emotion of the writing, revelatory appeal of the visual compositions, and brevity of the form creates an intensely moving experiential journey.”