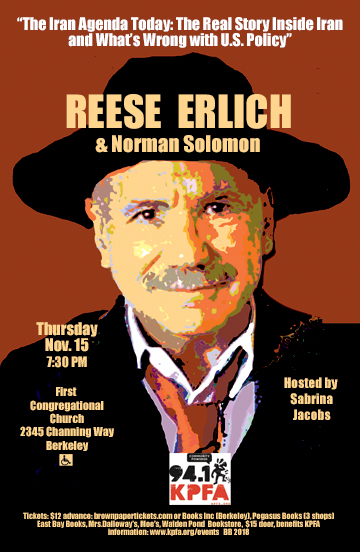 The Iran Agenda Today: The Real Story Inside Iran and What’s Wrong with US Policy

Based on frequent, first-hand reporting in Iran and the United States, The Iran Agenda Today explores the turbulent recent history between the two countries and reveals how it has led to a misguided showdown over nuclear technology. Foreign correspondent Reese Erlich notes that all the major U.S. intelligence agencies agree Iran has not had a nuclear weapons program since at least 2003. He explores why Washington nonetheless continues saber rattling, and he provides a detailed critique of mainstream media coverage of Iran. The book further details the popular protests that have rocked Tehran despite repression by the country’s own Deep State. Erlich offers insights on Iran’s domestic politics, popular culture, and diverse populations over this recent era. His analysis draws on past interviews with high-ranking Iranian officials, the former shah’s son, Reza Pahlavi, and Iranian exiles in Los Angeles, as well as his trip to Tehran with actor Sean Penn. Erlich’s book Target Iraq: What the News Media Didn’t Tell You, co-authored with Norman Solomon was a best seller in 2003. His fifth book, Inside Syria: the Backstory of Their Civil War and What the World Can Expect (foreword by Noam Chomsky) was published in 2014. In a starred review of Inside Syria, Publisher’s Weekly wrote that Erlich’s “insights and conclusions are objective and valuable… essential reading for understanding the current turmoil in the Middle East.

Norman Solomon is the author of a dozen books including “War Made Easy: How Presidents and Pundits Keep Spinning Us to Death. He is also the Founder and Executive Director of the Institute for Public Accuracy, where he coordinates the ExposeFacts.org program for whistleblowers and press freedom, and co-founder of RootsAction.org.

Sabrina Jacobs is host and producer of the popular A Rude Awakening, aired on KPFA, Mondays 3:30 -4pm. She covers local breaking news as well as global events, informing listeners about the latest social injustices. Ms. Jacobs is also currently serving as staff representative/vice chair of Pacifica Radio’s National Board.