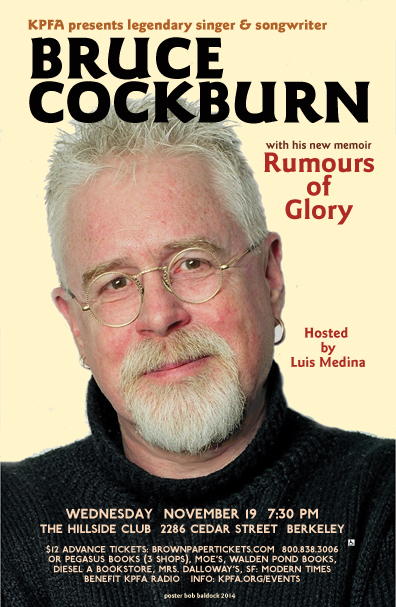 
Legendary singer/songwriter Bruce Cockburn delivers his long-awaited memoir—a fascinating chronicle of faith, fear, and activism that is a vivid political and musical tour through the late twentieth century.

In Rumours of Glory the pioneering guitarist and award-winning songwriter invites us into his personal world, providing an intimate commentary on his life and work, focused on the roots of his songwriting and the stories behind his best-known songs (referencing over 104 songs and lyrics throughout). From his birth in Ottawa in 1945 to Baghdad in 2004, Cockburn shares his family life, personal relationships, Christian convictions and the powerful social and political activism that has defined the man and his music. His lyrics have been covered by Jerry Garcia, Chet Atkins, Judy Collins, Barenaked Ladies, Jimmy Buffett, k.d.Laing and others.

Bruce Cockburn’s journey, both as musician and thinker, draws us with him into spiritual and political realms…Rumours of Glory is a highly personal account by one whose quest for expression engages the most important social questions of our time.

Music has always been Cockburn’s way to explore culture, the nature of the spirit, and politics, as he embraced folk, jazz, blues, rock and world beat styles, visiting Guatemala, El Salvador, Chile, Nicaragua, Mali, Mozambique, Nepal, Iraq and Afghanistan – not only performing his music, but also witnessing the plight of people throughout these countries. A longtime activist, he has spoken out on native rights, the devastation caused by landmines, human rights’ atrocities in war-torn lands, Third World debt and all the ecological devastation caused by corporate crime.

He believes we can and should be dedicated to our shared humanity, to saving each other and this earth. He insists we simply need to find the will. For him, that comes out of maintaining a relationship with the Divine, and following the way of love.