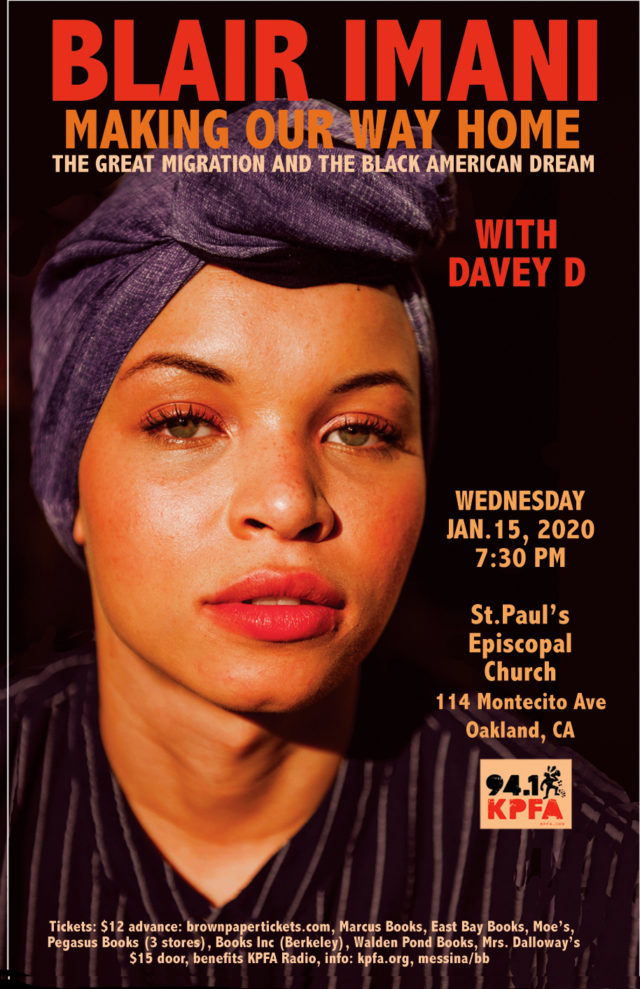 Over the course of six decades an unprecedented wave of Black Americans left the south and spread across the nation in search of a better life. This migration sparked stunning demographic and cultural changes throughout twentieth-century America. Through gripping and accessible historical narrative paired with illustrations, author and activist Blair Imani portrays the largely overlooked impact of the Great Migration and how it affected – and continues to affect – not only Black identity, but this nation as a whole. Making Our Way Home explores issues such as voting rights, domestic terrorism and segregation, along with the flourishing of arts and culture, new activism, and civil rights. She shows how these influences shaped America’s workforce and wealth distribution by featuring the stories of notable people and events, relevant data, and family histories. The experiences of such prominent figures as James Baldwin, Fannie Lou Hamer, El Hajj Malik El Shabazz (Malcolm X), Ella Baker, and others are woven into the larger narrative to create a truly unique record of this manificent journey.

Blair Imani is a critically-acclaimed historian, outspoken activist, and dynamic public speaker. The author of Modern HERstory: Stories of Women and Nonbinary People Rewriting History (2018) she focuses on women and girls, global Black communities, and the LGBTQ community. She serves as the official ambassador of Muslims for Progressive Values, one of the oldest progressive Muslim organizations supporting the LGBTQ+ community, and she dedicates her platform to advocating for the rights of marginalized people around the world. In 2014, she founded Equality for HER, a non-profit organization that provided resources and a forum for women and nonbinary people to feel empowered. Blair Imani has appeared on television and at progressive conferences around the world. She has been profiled in Teen Vogue, The Advocate, Variety, The Today Show, and by Yahoo! News. From the United States to countries like Kenya and the United Kingdom, Blair Imani has inspired audiences around the world. In 2017, on national television she came out as a queer Muslim woman.

Davey D is a nationally recognized journalist, adjunct professor, Hip Hop historian, syndicated talk show host, radio programmer, producer, deejay, media and community activist. Originally from the Bronx, NY, Davey D’s been down with Hip Hop since since 1977. A graduate of U.C. Berkeley, Davey D is the co-founder and host of several of the most cited Hip Hop radio and online news journalism projects of all time. Hard Knock Radio (HKR) is an award-winning daily syndicated prime time afternoon show focusing on Hip Hop culture and politics. It originated in 1999 on KPFA 94.1 FM in the San Francisco Bay Area, and now can be heard in Seattle, Atlanta, Portland, Fresno and is streamed live over KPFA.org, where it reaches close to a million listeners every weekday.