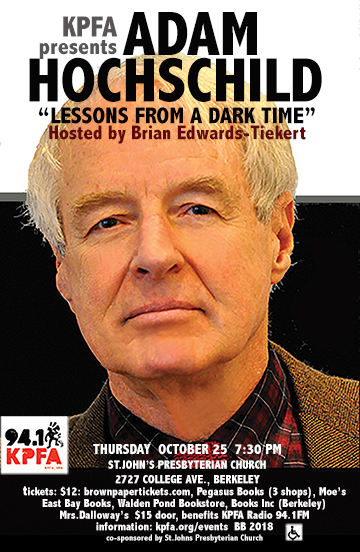 This new book reveals Adam Hochschild’s journalism in all its glory. His facts are like jewels, luminous in their importance. As a reporter and historian, he turns the facts into stories so dynamic and vivid that I couldn’t put the book down. This is important work by a gifted writer at the top of his game.
—Elizabeth Farnsworth, author, filmmaker, formerly of PBS Newshour

In this lively collection, bestselling author Adam Hochschild has selected some two dozen essays and pieces of reporting from his long career. Threading through all of them is his concern for social justice and the people who have fought for it. The articles cover the world, from a California gun show to a Congolese center for rape victims to the ruins of gulag camps in the Soviet Arctic, from a stroll through construction sites with an ecologically pioneering architect in India to a day on the campaign trail with Nelson Mandela. Hochschild discusses also the writers he loves, from Mark Twain to John McPhee, about why so much history is written so badly, about what bookshelves tell us about their owners, and about the ringside seat he had for the shocking revelation in the 1960’s of the way the CIA had been secretly controlling dozens of supposedly independent organizations.

Among Adam Hochschild’s books ::
– The Mirror at Midnight: A South African Journey,
– The Unquiet Ghost: Russians Remember Stalin,
– King Leopold’s Ghost: A Story of Greed, Terror, and Heroism in Colonial Africa ,
– Spain in Our Hearts: Americans in the Spanish Civil War, 1936–1939

Brian Edwards-Tiekert is the founder and co-host of UpFront, the morning drive-time public affairs program on KPFA Radio. He started his work in media helping to set up the Independent Media Center in Chiapas, Mexico, where he also did human rights work. For two years, he ran a nationwide support program for progressive publications at colleges and universities. He started at KPFA as a beat reporter covering environmental justice issues, during which time he served as a network correspondent during international climate negotiations, produced live national broadcasts covering elections and political conventions, and established a journalism training program inside KPFA. In 2016, he was awarded a John S. Knight Journalism Fellowship at Stanford University.