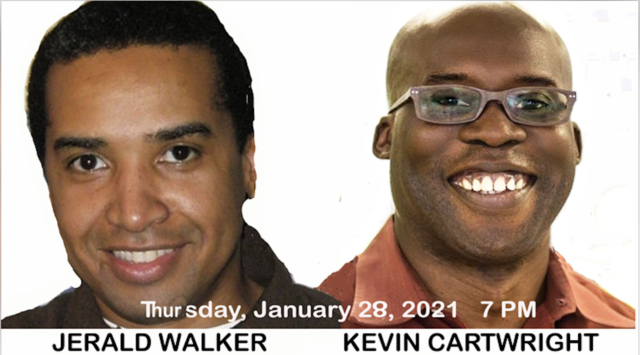 Jerald Walker and
Kevin Cartwright
How to Make a Slave

For the Black community, Jerald Walker asserts in How To Make a Slave, anger is often a prelude to a joke, as there is broad understanding that the triumph over this destructive emotion is in finding it’s punchline.” It is on the knife’s edge between fury and farce that the essays in this exquisite collection balance. Whether confronting the medical profession’s racial biases, considering the complicated legacy of Michael Jackson, paying homage to his writing mentor, or attempting to break free of personal and societal stereotypes, Walker elegantly blends intimate revelation and cultural critique. The result is a bracing, often humorous examination by one of America’s most acclaimed essayists of what it is to grow, parent, write, and simply exist at this time as a Black American male.

These powerful essays offer an incisive glimpse into life as a Black man in America… crafted with honesty and a wry comedic flair, these essays are both engaging and enraging.

Jerald Walker is the author of The World in Flames: A Black Boyhood in a White Supremacist Doomsday Cult and Street Shadows: A Memoir of Race, Rebellion, and Redemption (winner of the 2011 PEN New England Award for Nonfiction). His work has been widely anthologized, including five times in The Best American Essays. He is currently Professor of Creative Writing at Emerson College.

Kevin Cartwright, a former Program Director with KPFA Radio, has also produced a and contributed to a number of local and national public affairs programs, including Democracy Now, Living Room, The Morning Show, Education Today, 1440, and various short run documentaries. In addition, Kevin is a playwright, poet, and short story writer. He’s written several full-length plays about life in Oakland, and is currently finishing two plays dealing with the musical implications of life under racism.